Broken Arrow is a city located in the northeastern part of the U.S. state of Oklahoma, primarily in Tulsa County, and western Wagoner County. It is the largest suburb of Tulsa. According to the 2010 census, Broken Arrow has a population of 98,850 residents and is the fourth-largest city in the state. [4] However, a July 2017, estimate reports that the population of the city is just under 112,000, making it the 280th-largest city in the United States. The city is part of the Tulsa Metropolitan Area, which has a population of 961,561 residents.

The Missouri–Kansas–Texas Railroad sold lots for the town site in 1902 and company secretary William S. Fears named it Broken Arrow. [5] The city was named for a Creek community settled by Creek Indians who had been forced to relocate from Alabama to Oklahoma along the Trail of Tears.

Although Broken Arrow was originally an agricultural community, its current economy is diverse. The city has the third-largest concentration of manufacturers in the state. [6]

The city's name comes from an old Creek community in Alabama. [7] Members of that community were expelled from Alabama by the United States government, along the Trail of Tears in the 1830s. The Creek founded a new community in the Indian Territory, and named it after their old settlement in Alabama. The town's Creek name was Rekackv (pronounced thlee-Kawtch-kuh), meaning broken arrow. The new Creek settlement was located several miles south of present-day downtown Broken Arrow.

The community of Elam, located in present day Broken Arrow near 145th East Avenue and 111th Street, began around 1901. It consisted of a cluster of stores, a gin, and a few homes. [8]

In 1902 the Missouri–Kansas–Texas Railroad planned a railroad through the area and was granted town site privileges along the route. [5] They sold three of the as-yet-unnamed sites to the Arkansas Valley Town Site Company. William S. Fears, secretary of that company, was allowed to choose and name one of the locations. He selected a site about 18 miles (29 km) southeast of Tulsa and about five miles north of the thlee-Kawtch-kuh settlement and named the new town site Broken Arrow, after the Indian settlement.[ citation needed] The MKT railroad, which was completed in 1903, ran through the middle of the city. It still exists today and is now owned by Union Pacific which currently uses it for freight.

For the first decades of Broken Arrow's history, the town's economy was based mainly on agriculture. [9] The coal industry also played an important role, with several strip coal mines located near the city in the early 20th century. The city's newspaper, the Broken Arrow Ledger, started within a couple of years of the city's founding. Broken Arrow's first school was built in 1904. [9] The city did not grow much during the first half of the 1900s. During this time Broken Arrow's main commercial center was along Main Street. Most of the city's churches were also located on or near Main Street as well. A 1907 government census listed Broken Arrow's population at 1383. [10] 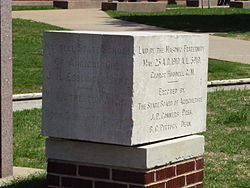 The only remnant of Haskell State School of Agriculture, built 1911, demolished 1987

The Haskell State School of Agriculture opened in the Broken Arrow, Oklahoma Opera House on November 15, 1909. The school closed in 1917 for lack of funding, and the building was then used as Broken Arrow High School. The building was razed in 1987. [11] Only a marker, shown here, remains at 808 East College Street in Broken Arrow. The front of cornerstone reads, "Haskell State School / Of Agriculture / J. H. Esslinger Supt. / W. A. Etherton Archt. / Bucy & Walker Contr." The side of cornerstone reads "Laid by the Masonic Fraternity / May 25, A. D. 1910, A. L. 5810. / George Huddell G. M. / Erected by The State Board of Agriculture / J. P. Conners Pres. / B. C. Pittuck Dean.". The school is commemorated on the National Register of Historic Places.

In the 1960s, Broken Arrow began to grow from a small town into a suburban city. The Broken Arrow Expressway ( Oklahoma State Highway 51) was constructed in the mid-1960s and connected the city with downtown Tulsa, fueling growth in Broken Arrow. The population swelled from a little above 11,000 in 1970 to more than 50,000 in 1990, and then more than 74,000 by the year 2000. During this time, the city was more of a bedroom community. In recent years, city leaders have pushed for more economic development to help keep more Broken Arrowans working, shopping and relaxing in town rather than going to other cities.

Broken Arrow is located in the northeastern corner of Oklahoma. The city is part of the state's Green Country region known for its green vegetation, hills and lakes. Green Country is the most topographically diverse portion of the state with seven of Oklahoma's 11 eco-regions. [12]

Broken Arrow has the typical eastern and central Oklahoma humid subtropical climate ( Köppen Cfa) with uncomfortably hot summers and highly variable winters that can range from very warm to very cold depending on whether the air mass comes from warmed air over the Rocky Mountains or very cold polar anticyclones from Canada. 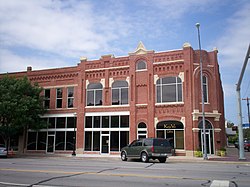 Historic building on Main Street after a total restoration (June, 2007)

Broken Arrow is home to a wide range of businesses and industries. In fact, the city is ranked third in its concentration of manufacturers in the state. [6]

Some of the city's more notable employers include:

Located in Broken Arrow since 1985, FlightSafety International (FSI) designs and builds aviation crew training devices called Flight Simulators at its Simulation Systems Division. With currently over 675 employees located there, of which about half are engineers, FSI is the largest private employer in the city. A number of new commercial developments are being built throughout the city, most notably along Oklahoma State Highway 51, which runs through the city. A Bass Pro Shops Outdoor World opened several years ago as the anchor to a development that includes hotels, restaurants, shopping, and eventually offices. A new full-service hospital and medical office building were constructed nearby in 2010 as an anchor to another large commercial development that will include retail space and two hotels. Oklahoma's first Dick's Sporting Goods opened in late 2011. [25]

In late 2007, the Broken Arrow Chamber of Commerce began "Advance Broken Arrow", an economic development campaign aimed at expanding and diversifying the city's economic base. [27] 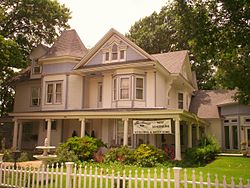 Historic 1904 Victorian home on Main Street in downtown BA that has been converted into a business (July, 2007)

In 2005, the city adopted a downtown revitalization master plan to help revive the city's historic downtown area. Some of the plans include a new 3-story museum to house the historical society and genealogical society, a farmer's market and plaza, a new performing arts center, updates and expansions to area parks, the conversion of the historic Central Middle School on Main Street into a professional development center, infrastructure and landscape improvements, and incentives to encourage denser infill, redevelopment, and reuse of the area's historic structures. Numerous buildings and homes have since been renovated, many new shops and offices have moved to downtown, and new townhomes are being built. The new historical museum, farmers market, and performing arts center opened in 2008.

The city also set strict new design standards in place that all new developments in the downtown area must adhere to. These standards were created to prevent "suburban" development in favor of denser, "urban" development and to ensure that new structures complement and fit in with the historic buildings in downtown. In October 2012 Downtown Broken Arrow's main street corridor was named the Rose District. [28]

Broken Arrow uses the council-manager model of municipal government. The city's primary authority resides in the city council which approves ordinances, resolutions, and contracts. The city council consists of five members with four members are elected from the four city wards with the fifth member as an at-large member. Each council member serves for a two-year term and is eligible to serve for four years. Out of the council members, a mayor and vice-mayor is chosen every two years. [29] The day-to-day operations of the city is run by the city manager who reports directly to the city council. [30] 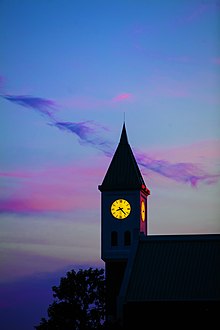 The NSU clock tower at sunset.

Higher education in Broken Arrow is provided by Northeastern State University (Broken Arrow campus). The campus opened in 2001 and has an upperclassmen and graduate student population of 3,000. [37]

Broken Arrow is also served by Tulsa Technology Center Broken Arrow Campus. Established in 1983, it has an enrollment of about 3,500 full- and part-time secondary and adult students. [38]

Broken Arrow is also home to Rhema Bible Training Center, established in 1974 by Kenneth E. Hagin; located on 110 acres (45 ha), it has graduated over 40,000 alumni and has seven ministry concentrations. RBTC is currently led by Hagin's son, Kenneth W. Hagin.

Public transportation for Broken Arrow is provided by Tulsa Transit. It has one route that connects the city to Tulsa. Bus services run Monday through Friday. [40]

Broken Arrow has one newspaper, the Broken Arrow Ledger. The paper is published every Wednesday. [41] It is owned by BH Media Group. [42] The Tulsa World, northeast Oklahoma's major daily newspaper, also features Broken Arrow news regularly. The staff at the Ledger has featured journalists and photographers Lesa Jones, Doug Quinn, and G. B. Poindexter.