The Chavannes Gallery of the McKim Building, with murals painted by Pierre Puvis de Chavannes

The Boston Public Library is a municipal public library system in Boston, Massachusetts, United States, founded in 1848. [4] The Boston Public Library is also the Library for the Commonwealth [5] (formerly library of last recourse) [6] of the Commonwealth of Massachusetts; all adult residents of the commonwealth are entitled to borrowing and research privileges, and the library receives state funding. The Boston Public Library contains approximately 24 million volumes, [7] and electronic resources, making it the third-largest public library in the United States behind the federal Library of Congress and the New York Public Library, which is also privately endowed. In fiscal year 2014, the library held more than 10,000 programs, all free to the public, and lent 3.7 million materials. [8]

According to its website, the Boston Public Library has a collection of more than 23.7 million items, which makes it one of the largest municipal public library systems in the United States. The vast majority of the collection – over 22.7 million volumes — is held in the Central Branch research stacks. [9] Between July 2012 and June 2013, the annual circulation of the BPL was 3.69 million. [10] Because of the strength and importance of its research collection, the Boston Public Library is a member of the Association of Research Libraries (ARL), a not-for-profit organization comprising the research libraries of North America. The New York Public Library is the only other public library that is a member of the ARL, and it also has a private endowment. The library has established collections of distinction, based on the collection's depth and breadth, including subjects such as Boston history, the Civil War, Irish history, etc. In addition, the library is both a federal and state depository of government documents.

Included in the BPL's research collection are more than 1.7 million rare books and manuscripts. It possesses wide-ranging and important holdings, including medieval manuscripts and incunabula, early editions of William Shakespeare (among which are a number of Shakespeare quartos and the First Folio), the George Ticknor collection of Spanish literature, a major collection of Daniel Defoe, records of colonial Boston, the personal 3,800 volume library of John Adams, the mathematical and astronomical library of Nathaniel Bowditch, important manuscript archives on abolitionism, including the papers of William Lloyd Garrison, and a major collection of materials on the Sacco and Vanzetti case. There are large collections of prints, photographs, postcards, and maps. The library, for example, holds one of the major collections of watercolors and drawings by Thomas Rowlandson. The library has a special strength in music, and holds the archives of the Handel and Haydn Society, scores from the estate of Serge Koussevitzky, and the papers of and grand piano belonging to the important American composer Walter Piston.

For all these reasons, the historian David McCullough has described the Boston Public Library as one of the five most important libraries in the United States, the others being the federal Library of Congress, the New York Public Library, and the university libraries of Harvard and Yale.

In the mid-19th century, several people were instrumental in the establishment of the Boston Public Library. George Ticknor, a Harvard professor and trustee of the Boston Athenaeum, proposed establishing a public library in Boston beginning as early as 1826. At the time, Ticknor could not generate enough interest. 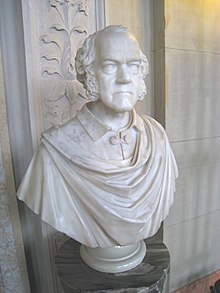 In 1839, Alexandre Vattemare, a Frenchman, suggested that all of Boston's libraries combine into one institution for the benefit of the public. [11] The idea was presented to many Boston libraries, however, most were uninterested in the idea. At Vattemare's urging, Paris sent gifts of books in 1843 and 1847 to assist in establishing a unified public library. Vattemare made yet another gift of books in 1849.

Josiah Quincy, Jr. anonymously donated $5,000 to begin funding a new library. Quincy made the donation while he was mayor of Boston. Indirectly, John Jacob Astor, businessman and philanthropist, also influenced the establishment of a public library in Boston. At the time of his death, Astor bequeathed $400,000 to New York to establish a public library there. Because of the cultural and economic rivalry between Boston and New York, this bequest prompted more discussion of establishing a public library in Boston. [12] In 1848, a statute of the Great and General Court of Massachusetts enabled the creation of the library. The library was officially established in Boston by a city ordinance in 1852. [13] Mayor Benjamin Seaver recommended to the city council that a librarian be appointed. In May 1852 the city council adopted the recommendations of the mayor and Edward Capen was chosen to become Boston Public Library's first librarian. [14]

Eager to support the library, Edward Everett collected documents from both houses of Congress, bound them at his own expense, and offered this collection to help establish the new library. At the time of Everett's donation, George Ticknor became involved in the active planning for the new library. [15] In 1852, financier Joshua Bates gave a gift of $50,000 to establish a library in Boston. After Bates' gift was received, Ticknor made lists of what books to purchase. He traveled extensively to purchase books for the library, visit other libraries, and set up book agencies. [15] 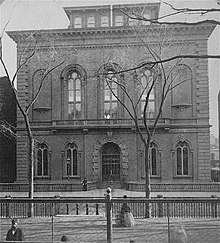 To house the collection, a former schoolhouse located on Mason Street was selected as the library's first home. On March 20, 1854, the Reading Room of the Boston Public Library officially opened to the public. The circulation department opened on May 2, 1854. 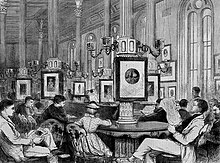 Reading Room in 1871 at the first Boylston Street building, the library's location between 1858 and 1895.

The opening day collection of 16,000 volumes fit in the Mason Street building, but it quickly became obvious that its quarters were inadequate. So in December 1854, the library's commissioners authorized the library to move to a new building on Boylston Street. Designed by Charles Kirk Kirby to hold 240,000 volumes, the imposing Italianate edifice opened in 1858. Eventually the library outgrew that building as well; in 1878, an examining committee recommended replacing it with a new one at another location.

By 1880, the Massachusetts legislature authorized construction of an even grander library building. A site selected was in Back Bay on Copley Square, the prominent corner of Boylston Street and Dartmouth Street, opposite Richardson's Trinity Church and near the first Boston Museum of Fine Arts. After several years of debate over the selection of the architects and architectural style for the new library, in 1887 the prestigious New York firm of McKim, Mead, and White was chosen to design the new library. In 1888, Charles Follen McKim proposed a Renaissance style design based on the Bibliotheque Ste-Geneviève in Paris. The trustees of the library approved, and construction commenced. The vast new reading room was called Bates Hall.

In 1870, the library opened the East Boston branch, the first branch library in the United States. With the aim of increasing its reach throughout the city and providing services to residents everywhere, the library opened 21 more branches in Boston neighborhoods between 1872 and 1900. [16]

In 1972, the Johnson building opened at the central Copley Square location, adjacent to the McKim building. The addition was designed by American architect Philip Johnson. In 1986, the National Park Service designated the McKim building as a National Historic Landmark. [16]

As of 2006 [update], the Library has had staffing and funding levels for conservation below that of its peers: the BPL's staff of two full-time conservators is significantly less than the thirty-five employed at the New York Public Library. Many colonial records and John Adams manuscripts are brittle, decaying, and so in need of attention that the Library's acting Keeper of Rare Books and Manuscripts said that "they are falling apart." [17]

In 2011, the library completed a strategic plan, the BPL Compass, which featured eight community-identified "Principles for Excellence". The principles in the plan and all of the related outcomes were the result of a two-year community engagement process for which Boston Public Library received national recognition. [18]

In 2017 the Boston Public Library received joint awards from both the American Institute of Architects (AIA) and the American Library Association (ALA) for the Central Library Renovation of its Johnson Building, and for the East Boston Branch. [23]

In 2019 supporters of the library established a new philanthropic fund: The Fund for the Boston Public Library, announced by Mayor Martin J. Walsh. It began with a $2.8 million investment by "Bank of America Charitable Foundation, Barr Foundation, The Boston Foundation, Liberty Mutual Foundation, State Street Foundation, Inc. and an anonymous donor."

The Boston Central Library is located in Copley Square in Boston's Back Bay neighborhood. The central library consists of the McKim Building and Johnson Building, which are attached and interconnected with interior passageways. The central library as a whole with the two buildings combined contains 930,000 square feet (86,000 m2) of space and houses 21 million items in its collections as of 2015. [25] 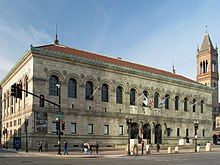 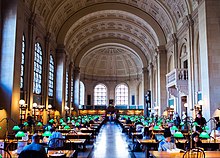 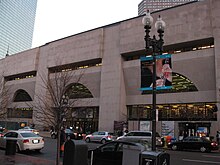 Designed by Philip Johnson, this late modernist addition (which somewhat anticipated postmodernist architecture) was built in 1967–1971 and opened in 1972. The Johnson building reflects similar proportions, and is built of the same pink Milford granite as the McKim building. Critics have likened it to a mausoleum, citing the small percentage of windows to relieve the massive walls in its exterior façade.

Upon opening, the Johnson building became the home for the BPL's main circulating collection, which includes works in many languages. It also serves as headquarters for the Boston Public Library's 24 branch libraries. [16]

As noted above, in 2013, the library began a major renovation project on the Johnson building. The first phase of the renovation opened in February 2015. The second phase included renovations to the building's first floor, mezzanine, and exterior, and opened in the summer 2016. [22] The $78 million renovation includes a new business innovation center and business library, a radio broadcasting studio for WGBH (FM), a 3D printer, and a café. [26]

The Boston Public Library offers desktop computers with pay-for-print services for public use and free wireless internet at the Central Library all 24 branches for anyone who has a wireless-enabled mobile device and a library card. Plug-in Ethernet access is also available in the McKim building's Bates Hall and the Honan-Allston Branch's Adult Reading Room for up to 2 hours. Library-card holders can also borrow laptops for in-library use for 2 hours at any location. [31] [33] [34]

The library offers a variety of digital services and collections. The online catalog, also available for mobile devices, allows users to browse and place holds on materials including books, audiobooks, DVDs, and CDs. Users can also download ebooks, e-audiobooks, music, and video through BPL's OverDrive site and check out Zinio magazines for the computer, tablet, or smartphone. Library card holders and e-card holders can also stream movies, television shows, music, and audiobooks through Hoopla Streaming Media. [35]

Many of the Boston Public Library's collections are available to the public online, including rare books and manuscripts, the anti-slavery manuscript collection, historical children's books, the John Adams Library, historic maps from the Norman B. Leventhal Map Center, historical images, prints, and photographs, sound archives, and silent films. [31] [36] Many of the library's digitized works can be found either through the Boston Public Library Flickr page [37] or through their collections on the Digital Commonwealth. [38]

Boston Public Library has two digital partners-in-residence at the Central Library in Copley Square. The first is Internet Archive, a nonprofit digital library that offers permanent access to historical collections in digital format for researchers, historians, and the general public. The Digital Public Library of America provides access to digital content from American libraries, archives, museums, and historical societies. [43]

In the latter half of the 19th century, the library worked vigorously to develop and expand its branch library system. Viewed as a means to extend its presence throughout the city, the branch system evolved from an idea in 1867 to a reality in 1870, when the first branch library in the United States was opened in East Boston. The library currently has 24 branches serving diverse populations in the city's neighborhoods. [44] 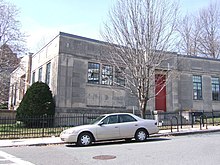 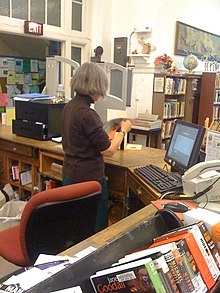 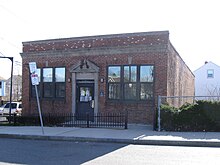 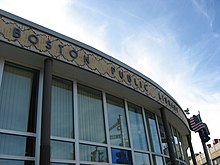