Boise Airport ( IATA: BOI, ICAO: KBOI, FAA LID: BOI) (Boise Air Terminal or Gowen Field) [1] [3] is a joint civil-military airport three miles south of Boise in Ada County, Idaho, United States. [1] The airport is operated by the city of Boise Department of Aviation and is overseen by an Airport Commission. [4] It is by far the busiest airport in the state of Idaho, serving more passengers than all other Idaho airports combined and roughly ten times as many passengers as Idaho's second busiest airport, Idaho Falls Regional Airport.[ citation needed]

In addition to being a commercial and general aviation airport, Boise also functions concurrently as a USAF military facility as used by the 124th Fighter Wing (124 FW) of the Idaho Air National Guard on the Gowen Field Air National Guard Base portion of the airport. The 124 FW operates the A-10 Thunderbolt II aircraft.

The National Interagency Fire Center (NIFC) is based in the city of Boise and the Boise Airport is used for logistical support. The United States Forest Service (USFS) also uses Boise Airport as a base for aerial firefighting air tankers during the wildfire season. [5]

Boise's first municipal airport, Booth Field, was built in 1926 on a gravel bed near the south bank of the Boise River, now the campus of Boise State University. The first commercial airmail flight in the United States passed through this airfield on April 26, 1926, carried by Varney Airlines. Varney began operating out of Boise in 1933, later merging with National Air Transport to become United Airlines. Since United traces its roots to Varney, United is recognized as the airline that has operated the longest out of Boise, 94 years as of 2020. Less than four months after his historic transatlantic flight, the airfield hosted Charles Lindbergh and the Spirit of St. Louis on September 4, 1927. [7] [8]

The current airport has its origins in 1936 when Boise began buying and leasing land for the airport. By 1938, Boise had the longest runway in the United States at 8,800 feet (2,680 m), built as a Works Progress Administration (WPA) project under sponsorship of the city. [9] The steel hangar for Varney Airlines was moved to the present field in 1939. As aircraft grew the hangar was no longer big enough and was converted into a passenger terminal. It was part of the modern terminal facility until the completion of a new terminal in 2004.

During World War II, the U.S. Army Air Forces leased the field for use as a training base for B-17 Flying Fortress and B-24 Liberator bomber crews. More than six thousand men were stationed there during the war. [4]

The field was named Gowen Field in 1941 on July 23, after 1st Lt Paul R. Gowen (1909–1938). [10] [11] Born and raised in Caldwell, he attended the University of Idaho for two years, then obtained an appointment to West Point in 1929, and graduated ninth in his class in 1933. [11] [12] While piloting a twin-engine B-10 bomber in the Army Air Corps, Gowen was killed instantly in a crash in Panama in July 1938. [11] The right engine failed shortly after take-off from Albrook Field, near Panama City. The other two crew members, navigator and radio operator, survived and crawled from the wreckage with burns. [13] [14]

After the war the part of the field used by the Army Air Forces was returned to the city. [4] The Idaho Air National Guard began leasing the airfield after the war and continues to do so at the present time. [4]

By 1976, Hughes Airwest and United were still the only two airlines operating jet service into Boise according to the Official Airline Guide (OAG). United had also expanded its Boise service by this time and was operating nonstop flights with Boeing 727 (-100, -200) and larger Douglas DC-8 jetliners to Chicago (O'Hare), Denver (Stapleton), Portland, Salt Lake City, San Francisco, Seattle, Reno, and Spokane as well as direct, no change of plane jet service to New York ( LaGuardia), Los Angeles, Boston, Washington, D.C ( National), San Diego, and Hartford, according to the Official Airline Guide (OAG). [18] United and Hughes Airwest were operating all of their flights into Boise with jet aircraft at this time.

Following the federal Airline Deregulation Act of 1978, a number of air carriers operated jet service into the airport at different times over the years from the late 1970s through the 1990s. The following list of airlines is taken from OAG editions from 1979 to 1999: [19]

Between 2001 and 2005, Boise Airport was remodeled with a new terminal and an elevated roadway for departures, constructed in two phases. Phase 1 considered amenities such as baggage claim, lobby, and food and beverage concession, which were completed in 2003. Phase 2 dealt with security checkpoints and a new concourse (Concourse C) and the remodeling of Concourse B, which were completed in 2005. [20]

The Boise Airport Passenger Terminal designed by CSHQA is a three-story, steel-framed 378,000-square-foot (35,100 m2) state-of-the-art aviation facility. Curvilinear, steel trusses create the undulating ceiling plane of the ticket lobby and define the signature profile of the building. The terminal has garnered national attention for the beauty of its design and is considered a prototypical post- 9/11 facility. [21]

The Boise Airport was fourth in passenger satisfaction in the J.D. Power and Associates 2004 Global Airport Satisfaction Index Study. [22] Power no longer publishes a global listing, and the airport was not listed in the 2017 North American ranking. [23]

The Boise Airport was a hub for Horizon Air from the late 1980s to the early 2000s. Horizon Air was acquired by the Alaska Air Group, the parent company of Alaska Airlines, in 1986 and began code sharing flights for Alaska Airlines at that time. During the summer of 1990, Horizon Air was operating up to 36 departures a day from the airport to destinations in Idaho, Oregon and Washington as well as direct one stop service to Salt Lake City. [24] By 1999, Horizon Air was operating up to 22 departures a day from Boise with Fokker F28 Fellowship jets with additional flights being operated with de Havilland Canada DHC-8 Dash 8 turboprops. [25] The regional airline also previously operated Dornier 328, Fairchild F-27 and Swearingen Metroliner propjets. [26] Boise is currently a focus city for Alaska Airlines service operated by both Horizon Air and code sharing partner SkyWest Airlines.[ citation needed]

Boise was also one of the primary destinations served by Cascade Airways which competed with Horizon Air. In 1985, Cascade was serving the airport with British Aircraft Corporation BAC One-Eleven jets and Swearingen Metroliner propjets with regional service in Idaho, Oregon, Washington and Montana as well as nonstop jet service to Reno, Nevada and connecting flights to Calgary, Alberta in Canada. [27][ better source needed]

Law enforcement is handled by the Boise Police Department. In 2006, the Airport Division had an authorized strength of 1 lieutenant, 2 sergeants, and 28 officers, and there were five TSA certified K-9 units trained in explosive detection. [30]

The original layout was the primary runway (10R/28L) with two others at 6,000 feet (1,830 m), [9] both are retired but still visible as taxiways. The north–south runway (offset slightly northeast) was aligned with present-day S. Zeppelin Street (approximately with Owyhee Street to the north), and the east–west runway was offset slightly southwest. The intersection point of the two former runways was on today's main taxiway, near the terminal. The second parallel runway (10L/28R) was extended 2,300 feet (700 m) to the east in 1998. [31]

The new air traffic control tower under construction in 2009.

In 2008, city officials broke ground for Boise Air Terminal's a new airport traffic control tower, the latest facilities improvement. The tower's height at 295 feet (90 m) made it the tallest building in the state of Idaho until it was surpassed by the Zions Bank Idaho Headquarters Building in 2013 (at 323 ft (98 m)), and the Northwest's tallest control tower.[ citation needed] It was relocated to the south side of the airport in order to control an existing Guard assault strip, runway 09/27, south of Gowen Field. The tower was planned and constructed when it was believed that the radar functions would be moved to Salt Lake City in Utah. After it was decided to leave the radar positions in Boise, the facility at the base of the tower was redesigned and partially remodeled to house the Terminal Radar Approach Control ( TRACON). 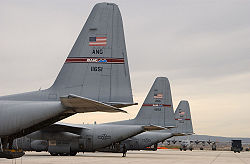 C-130s previously operated by the Idaho ANG parked on the ramp at Gowen Field.

The 124 FW was previously designated as the 124th Wing (124 WG), a composite Air Combat Command (ACC) and Air Mobility Command (AMC) unit that also operated C-130H Hercules transport aircraft in the 189th Airlift Squadron (189 AS), the 189 AS being operationally-gained by AMC.

BRAC 2005 directed that the Idaho Air National Guard divest itself of the C-130 mission by 2009, transferring its C-130s to the Wyoming Air National Guard, while retaining its A-10 fighter mission. This action was completed in 2009 and the 124 WG was redesignated the 124 FW at that time. The 124 FW is composed of over 1000 military personnel, consisting of just over 300 full-time Active Guard and Reserve (AGR) and Air Reserve Technician (ART) personnel and over 700 traditional part-time Air National Guardsmen. [5] [32]

In February 2011, FedEx donated a surplus Boeing 727-200 cargo jet (tail number N275FE) to the City of Boise for use as a training tool for emergency first responders. The aircraft—stripped of engines—is parked near the southeastern end of Boise's third runway—a location more than a mile southeast of, and not visible from, the main passenger terminal. Several agencies use the plane for training purposes.