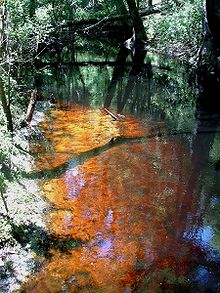 A blackwater river is a type of river with a slow-moving channel flowing through forested swamps or wetlands. As vegetation decays, tannins leach into the water, making a transparent, acidic water that is darkly stained, resembling tea. Most major blackwater rivers are in the Amazon Basin and the Southern United States. The term is used in fluvial studies, geology, geography, ecology, and biology. Not all dark rivers are blackwater in that technical sense. Some rivers in temperate regions, which drain or flow through areas of dark black loam, are simply black due to the color of the soil; these rivers are black mud rivers. There are also black mud estuaries.

Blackwater rivers are lower in nutrients than whitewater rivers and have ionic concentrations higher than rainwater. [1] [2] The unique conditions lead to flora and fauna that differ from both whitewater and clearwater rivers. [3] The classification of Amazonian rivers into black, clear, and whitewater was first proposed by Alfred Russel Wallace in 1853 based on water colour, but the types were more clearly defined by chemistry and physics by Harald Sioli ( de) from the 1950s to the 1980s. [3] [4] Although many Amazonian rivers fall clearly into one of these categories, others show a mix of characteristics and may vary depending on season and flood levels. [5]

Comparison between white and black waters

Black and white waters differ significantly in their ionic composition, as shown in Table 1. Black waters are more acidic, resulting in an aluminum concentration greater than that of the more neutral white waters. The major difference is the concentrations of sodium, magnesium, calcium, and potassium; these are very low in black waters. This has ecological implications. Some animals need more calcium than is available in blackwaters, so for example, snails, which need much calcium to build shells, are not abundant in blackwaters. The lack of dissolved ions in black waters results in a low conductivity, similar to that of rainwater.

Black and white waters differ in their planktonic fauna and flora. Tables 2 and 3 compare the number of planktonic animals caught in black and white water localities only a few meters apart. The black water was not as extreme an example as the Rio Negro system. However, it can be seen that the black water held greater numbers of rotifers but fewer crustaceans and mites. These crustaceans are important foods for larval fish. The zones where the two waters mix are attractive to ostracods and young fish. These mixing zones tend to have many animals. The abundance is shown in Table 3, which compares animals in 10 litres (2.2 imp gal; 2.6 US gal) of water. [7]

Comparison between clear and black waters

Blackwater rivers resemble clearwater rivers in having a low conductivity and relatively low levels of dissolved solids, but clearwater rivers have water that often only is somewhat acidic (typical pH ~6.5) [3] and very clear with a greenish color. [8] The main Amazonian clearwater rivers have their source in the Brazilian Plateau (such as Tapajós, Tocantins, Xingu and some right tributaries of the Madeira), but some originate in the Guiana Shield (such as Nhamundá, Paru, and Araguari). [9]

Blackwater rivers of the world

This list is incomplete; you can help by expanding it. 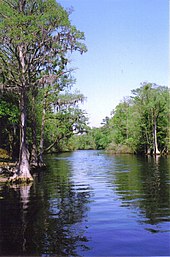 The Lumber River as seen from the boat launch at Princess Ann near Orrum, North Carolina 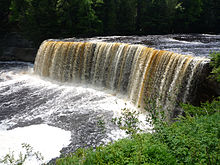 Other rivers in Australia may experience infrequent 'blackwater events' associated with flood waters connecting to forested floodplains and these events may be associated with hypoxic waters. Examples include the Murray River, Edward River, Wakool River and Murrumbidgee River. [14]