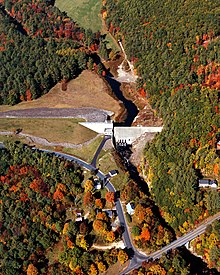 Blackwater Dam on the Blackwater River in Merrimack County

The Blackwater River is a 37.5-mile-long (60.4 km) [1] river located in central New Hampshire in the United States. It is a tributary of the Contoocook River, part of the Merrimack River watershed.

The Blackwater River is formed at Cilleyville, [2] a village in the western part of the town of Andover, by the junction of two branch streams that lack official names on current maps. The western branch, locally called Cascade Brook, begins at the outlet of Pleasant Lake in New London and flows east through Chase and Tannery ponds in Wilmot Flat. The northern stream branch, locally referred to as Frazier Brook, begins at the outlet of Eagle Pond in Wilmot and flows south past West Andover and through Bog Pond, joining the outlet of Pleasant Lake just south of the outlet of Bog Pond. Kimpton Brook (formerly known as Quickwater Brook [2]), flowing easterly through the village of Wilmot Center, is the primary tributary of Eagle Pond.