Billy Leo Williams (born June 15, 1938) is a retired American baseball left fielder who played 16 seasons in Major League Baseball (MLB) for the Chicago Cubs and 2 seasons for the Oakland Athletics. Williams was inducted into the National Baseball Hall of Fame in 1987. [1] In 1999, he was named a finalist for the Major League Baseball All-Century Team.

Williams was a highly competitive player on Cubs teams that never reached the postseason. When he finally played in the postseason during the second-to-last year of his career with the Athletics, the A's did not get to the World Series. In 1999, he was selected as a member of the Cubs All-Century Team.

Billy Williams was born in Whistler, Alabama. His father Frank was a stevedore who had also played first base for the semipro Whistler Stars. [2] Williams grew up in a segregated neighborhood. [3] He attended Whistler High School. [4] Entering professional baseball in 1956, Williams started his minor league career with the Ponca City Cubs of the Sooner State League. After returning to Ponca City in 1957 and hitting 17 home runs, Williams split 1958 between the Burlington Bees and Pueblo Bruins. [5]

In his autobiography, Williams recalled that he had never experienced overt racial discrimination until his 1959 promotion to the Class AA San Antonio Missions in San Antonio, Texas. He was so discouraged that he left the team and went home. Buck O'Neil, the Cubs scout who had originally discovered Williams, was dispatched to Whistler, and he persuaded Williams to return to the team. [6] During the 1959 season, he advanced to the Class AAA Fort Worth Cats and even played 18 games for the Cubs. [4] [5] In 1960, he hit 26 home runs for the Class AAA Houston Buffs and played in 12 major league games. [4] [5] 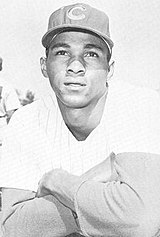 Williams joined a Chicago Cubs team that by the early 1960s would feature stars such as Ernie Banks, Ferguson Jenkins, and Ron Santo. Rogers Hornsby (winner of seven NL batting titles), who by 1960 was serving as a scout and coach in the Cubs organization, predicted Williams would someday win a batting title.

In each season from 1961 to 1973, Williams hit at least 20 home runs and drove in 84 or more runs. His batting swing was smooth and efficient, with quick wrist action that allowed him to hit for both average and power despite his slender frame. Early in his career, this earned him the nickname "Sweet-Swinging Billy Williams," sometimes shortened to "Sweet Williams" or "Sweet Billy". His nickname was later referenced in the subtitle of his autobiography. He was also nicknamed "Sweet-Swinging Billy from Whistler," in reference to his birthplace in Alabama. His home run feats included 3 homers in one game and 5 homers in 2 consecutive games. Twice in one season, Williams belted 4 extra-base hits in a game.

In 1970, Williams batted .322 with 42 homers and 129 RBI and finished second in National League Most Valuable Player voting; surprisingly, despite batting .319 with 26 HR and 80 RBI at the All-Star break, he was left off the All-Star team. Williams set a National League record for consecutive games played with 1,117 from 1963 to 1970 (this record was later eclipsed by Steve Garvey with 1,207 games played from 1975 to 1983). As his consecutive games streak began to accumulate, he was dubbed "Iron Man" by some writers. [7] He co-authored a 1970 book called Iron Man. [3] In 1972, he was the National League batting champion and named the Major League Player of the Year by The Sporting News. [8] He paced the league in batting average with a .333 mark, and posted a .606 slugging percentage with 37 home runs and 122 runs batted in (RBI). In August, he won his second and final NL Player of the Month Award (.438 average, 9 HR, 29 RBI). For the second time, he was the NL MVP runner-up to Johnny Bench of the Cincinnati Reds; Williams never won the award.

Williams was traded to the American League's Oakland Athletics after the 1974 season for second baseman Manny Trillo and two pitchers. [9] He helped lead Oakland to win the 1975 American League West championship as a designated hitter, hitting 23 homers with 81 RBI. In 1976, Williams played in 120 games and hit only .211. [4] He retired that year, playing his final major league game on October 2, 1976.

Williams credited a grade-school teacher with encouraging him to always try to improve, citing the old saying, "Good, better, best / Never let it rest / Until the good is better / And the better is best." [10]

Williams was elected to the Baseball Hall of Fame in 1987. On August 13, 1987, Williams' uniform number 26 was retired at Wrigley Field. His was the second number to be retired by the Cubs, the first being Ernie Banks' number 14. Following his departure from the Cubs, the number was reassigned to other players from time to time, most notably Larry Biittner; Williams reclaimed it during several intervals of coaching with the Cubs after his playing days had ended.

In 1999, he was selected to the Cubs All-Century Team and was named as one of 100 finalists to the Major League Baseball All-Century Team. During the 2010 season, the Cubs honored Williams with a statue outside Wrigley Field in Chicago. The statue was unveiled in a pre-game ceremony before their home game on September 7 against the Houston Astros. [11]