Berlin /ˈbɜːrlɪn/ [4] is a city along the Androscoggin River in Coös County in northern New Hampshire, United States. It is the northernmost city in New Hampshire. The population was 10,051 at the 2010 census. [5] As of July 1, 2018, the estimated population was 10,200. [3] It includes the village of Cascade in the south part of the city. Located in New Hampshire's Great North Woods Region or "North Country", Berlin sits at the edge of the White Mountains, and the city's boundaries extend into the White Mountain National Forest. Berlin is home to the Berlin and Coos County Historical Society's Moffett House Museum & Genealogy Center, Service Credit Union Heritage Park, the Berlin Fish Hatchery, and the White Mountains Community College, member of the Community College System of New Hampshire.

Berlin is the principal city of the Berlin Micropolitan Statistical Area, which includes all of Coos County, New Hampshire and Essex County, Vermont. Because Quebec is less than 60 miles (100 km) away, Berlin has many people of French Canadian descent in its population. Around 65% of its residents speak a variant of New England French, which is locally known as "Berlin French". [6] 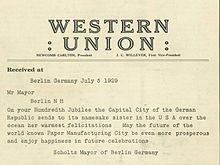 A letter from Mayor Arthur Scholtz of Berlin, Germany honoring the "Paper City" on its 100th anniversary on July 5, 1929 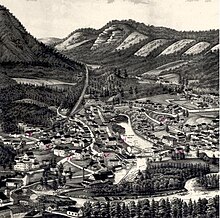 Around 11,000 years ago, small groups of Native Americans camped around the area of what is now called Berlin. In later years, the Eastern Abenaki tribes came to Berlin to mine rhyolite on Mt. Jasper.

When English colonists came to America, Berlin was first granted on December 31, 1771, by Colonial Governor John Wentworth, as "Maynesborough" after Sir William Mayne. [7] But the grantees did not take up their claims, which disappeared with the Revolution. In 1802, Seth Eames and Gideon Tirrell were sent by the descendants of Mayne to explore and mark lots for settlers, and still no one came. Maynesborough was settled in 1823–1824 by William Sessions and his nephew, Cyrus Wheeler. [8] Both men were from Gilead, Maine. Farming was the first industry. With 65 inhabitants in 1829, the New England town was reincorporated on July 1 as Berlin with the help of Cyrus' father, Thomas Wheeler. [9]

Situated in a heavily forested region, the community developed early into a center for logging and wood industries. Falls on the Androscoggin River provided water power for sawmills. In 1826, a road was built to Gorham by Thomas, Amos, and Daniel Green. In 1851, the St. Lawrence & Atlantic Railroad entered Berlin, connecting it to other markets. Acquiring water, timber, and rail rights in the early 1850s, the H. Winslow & Company built a large sawmill at the head of "Berlin Falls". In 1868, William Wentworth Brown and Lewis T. Brown bought a controlling interest in the business and changed its name to the Berlin Mills Company.

By 1885, the mill town was home to several pulp and paper mills, including the Riverside Mill, Forest Fibre Company and White Mountain Pulp & Paper Company. Because of the need for labor in the mills, immigrants arrived from Russia, Norway, Finland, Italy, Sweden, Ireland, and Germany. Many others were French Canadians from nearby Quebec.

In 1872, a group of Scandinavians founded the nation's oldest ski club, which still exists today. [10] It was originally called the North American Ski Club (in Norwegian, Nordamerikansk Skiklubben), but later was renamed the Nansen Ski Club. This was in honor of Fridtjof Nansen, who in 1888 skied across Greenland. In 1897, Berlin was incorporated as a city, the northernmost in the state.

As of 1874, the Boston and Maine Railway passed through the eastern portion of the town and operated on this line until the 1980s. [7] The old railroad bed has since been converted for usage as an ATV trail.

Berlin's main industry in the early 20th century was the pulp and paper industries, which have been in a long decline since that time. As jobs left the area, the population has decreased and is about half its peak of more than 20,000 in the 1930 census. In 1917, the Berlin Mills Company was renamed the Brown Company, because of World War I and anti-German feeling against the enemy of the time. A short time after the Great Depression, the Brown Company went into receivership. Surviving with governmental help, it was bought and sold several times after World War II.

In 2001, American Tissue filed for bankruptcy, before which it had stopped paying city taxes. Its facilities were purchased in 2002 by Fraser Papers of Canada. But in March 2006, Fraser Papers announced the closing of Berlin's pulp mill. On May 6, 2006, 250 employees were displaced, some moving to Cascade's paper finishing mill, but most were left unemployed. [11]

On October 3, 2006, the North American Dismantling Corporation of Michigan announced that it had bought the 121-acre (49 ha) defunct pulp mill site of Fraser Paper, and would spend a year demolishing the property to allow redevelopment. [12] Laidlaw Energy LLC has since purchased a portion of the former Fraser property, including a large recovery boiler which it intends to convert into a 66-megawatt biomass plant in 2010–2011. [13]

In the 1990s, the local historian and author Paul "Poof" Tardiff began writing articles in The Berlin Daily Sun. He later collected these in a three-volume series titled Once Upon a Berlin Time, which documents local history. He continued to write articles for the newspaper every Tuesday and Thursday until his death in 2018. [14]

Berlin is located in northern New Hampshire, north of the White Mountains, in the state's North Country region. The city is bordered to the south by Randolph and Gorham, north by Milan, east by Success and west by Kilkenny. New Hampshire Route 16 passes through the center of the city, leading north to Errol and eventually to Rangeley in Maine, and leading south through Gorham and Pinkham Notch to North Conway and the Seacoast Region of New Hampshire. New Hampshire Route 110 leads northwest out of Berlin through West Milan to Groveton. NH 110 is known locally as the Berlin-Groveton Highway.

According to the United States Census Bureau, the city has a total area of 62.5 square miles (162 km2), of which 61.6 square miles (160 km2) is land and 0.9 square miles (2.3 km2) is water, comprising 1.35% of the city. [16] Berlin is situated at the confluence of the Androscoggin and Dead rivers. The Mahoosuc Range is to the southeast. Jericho Mountain State Park, created from a city park and from private land in 2005, is west of the city center and features a reservoir created in the 1970s and a network of ATV trails. The city's highest point is Mount Weeks, at 3,901 feet (1,189 m) above sea level. A prominent feature in the landscape of Berlin is 2,031-foot (619 m) Mount Forist, rising over the west side of the city. Approximately half of Berlin lies within the Connecticut River watershed, and half lies in the Androscoggin River watershed. [17] 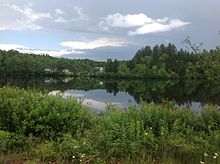 York Pond with the Berlin Fish Hatchery in the background.

Of the 4,178 households, 25.8% had children under the age of 18 living with them, 43.2% were headed by married couples living together, 11.8% had a female householder with no husband present, and 39.8% were non-families. 33.3% of all households were made up of individuals, and 15.2% were someone living alone who was 65 years of age or older. The average household size was 2.18, and the average family size was 2.71. 955 city residents lived in group quarters rather than households. [21]

In the 1930s, Berlin was at its peak for population and economic growth. The population in 1930 was over 20,000 people, the most the city has ever had. Main Street in downtown had many family-owned businesses which would attract many people in the city. The Nansen Ski Jump just north of the city limits in Milan was a highlight for Berlin. Built in 1936, it was the largest ski jump in the eastern United States for almost 50 years, until it closed in 1988. It was fully restored in the beginning of 2017.

At the presidential level, Berlin is a reliably Democratic stronghold; however, President Donald Trump came close to winning the city in 2016 when he lost it by just under five points, marking the best performance for a Republican presidential nominee in the city in over two decades.

Law enforcement is provided by the Berlin Police Department. The Berlin police station is currently located at 135 Green Street on the corner of Green and Gilbert Streets, and First Avenue. The present structure was completed in 1927, first serving as an armory for the New Hampshire Army National Guard. The building later became the police station when the current armory was erected, replacing the out-of-date, smaller Cole Street station. [26]

The Berlin Police Department has 21 full-time officers, 17 part-time auxiliary/special enforcement officers, and ten civilian personnel. There is a communications specialist working dispatch at all times of the day. [27]

The Berlin Fire Department is currently located at 263 Main Street. [28] Historically, the fire department had three fire stations, the Eastside station (below the former King School), the Berlin Mills station (on Upper Main Street, near Brown School), and the Central station (present building). [26]

The city of Berlin allows any ATV/ OHRV to ride on city streets, as long as the operator is 18 years or older and can provide a driver's license.

Berlin holds the Jericho ATV Festival every year on the first weekend of August. The event draws thousands of people from far afield, as well as many who reside in Berlin and Gorham.

Coos County offers a great amount of trails for ATV riders, connecting Berlin to the towns of Gorham, Milan, Errol, Groveton, Stratford, Colebrook, and Pittsburg. The Success trails lead riders from Berlin north to Milan and Errol. The Millsfield trails then go northwest from Errol, connecting with the North Country Trail from Groveton. From there, the Great North Woods Trails head north to the town of Pittsburg, the northernmost town in New Hampshire.

Trails throughout the city and Jericho Mountain State Park are closed from the end of snowboard season until May 23 of every year (mud season). [29]

The major roads serving Berlin are New Hampshire Routes 16 and 110. NH 16 connects Berlin with Gorham and eventually North Conway to the south and Milan and Errol to the north. NH 110 begins in downtown Berlin and travels northwest through West Milan and Stark, ending in Groveton.

Berlin serves as the northern terminus of the Berlin–Conway–New Hampton route of Concord Coach Lines.

Two airports are located nearby to Berlin, Berlin Regional Airport and Gorham Airport.

Other stations that can be heard in the area can be found here: [30]

The Berlin BlackJacks is a team in Quebec's low-level professional hockey league, the Ligue Nord-Américaine de Hockey, since 2018. They play their home games at the Notre Dame Arena on Hillside Ave. 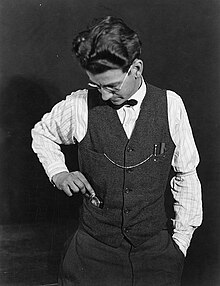 Hiram A. Farrand with the Farrand Rapid Rule

The following items were created in Berlin: 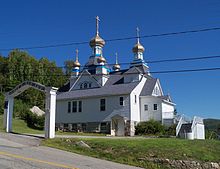 Holy Resurrection Orthodox Church, added in 1979 to the NRHP

Berlin is home to the following sites listed on the National Register of Historic Places: