Not to be confused with New Bedford, Massachusetts

Bedford is a town in Middlesex County, Massachusetts, United States. It is within the Greater Boston area, 15 miles (24 km) north-west of the city of Boston. The population of Bedford was 13,320 at the 2010 census.

The following compilation comes from Ellen Abrams (1999) based on information from Abram English Brown's History of the Town of Bedford (1891), as well as other sources such as The Bedford Sampler Bicentennial Edition containing Daisy Pickman Oakley's articles, Bedford Vital Records, New England Historical and Genealogical Register, Town Directories, and other publications from the Bedford Historical Society.

In 1630, John Winthrop and Thomas Dudley of the Massachusetts Bay Company arrived aboard the Arabella from Yarmouth, England. After a difficult ten-week voyage, they landed on the shores of the New World, with Salem and Boston Harbor being the Arabella's earliest destinations. In 1637, the General Court of Massachusetts granted some 2,200 acres (9 km²) of land, including Huckins Farm [1] land to the first governor, John Winthrop, and to Deputy Governor Thomas Dudley. The following year, the two men agreed to divide the land so that the parcel south of the two large boulders by the Concord River (Brothers Rocks) belonged to Governor Winthrop and north of the Rocks was to belong to Deputy Governor Dudley. Later, Dudley became governor. Dudley's son Rev. Samuel Dudley [2] and Winthrop's daughter Mary were married; thus Brothers Rocks were so named because of this marriage of families.

Governor Winthrop's grandson, Fitz John Winthrop, in 1664, sold 1,200 acres (5 km²) of this land (including what is present-day Huckins Farm [3]) to Job Lane (1), a skilled artisan and house builder, in exchange for a house that Lane built for him in Connecticut. (Note: The numbers appended to the names of Lane family members indicate the generation number beginning with Job Lane (1), who immigrated from Mill End, Rickmansworth, England.) Upon his death, he passed all of this land to his son, John Lane (2), who left it to his three sons, John Lane (3), Job Lane (3), and James Lane (3). John Lane and his wife, Catherine (Whiting), lived on the site, and after she died, he married Hannah Abbott. Upon his death in 1763, their son, Samuel Lane, inherited the land now known as Huckins Farm. Some time after Samuel Lane died in 1802, the house was removed and Peter Farmer built the present farmhouse in the 1840s. It is known that Peter and Dorcas Farmer had two children in the late 1820s and 1830s. Later, Banfield succeeded Farmer as the owner.

Samuel W. Huckins, born in 1817, settled on the land about 1870. Huckins was respected for his good judgment and was honored with various offices in town. Maps circa 1875 indicate that what is now known as Dudley Road was once called Huckins Street. Samuel Huckins lived there until his death in 1892. He had a son, Henry, who was born in 1849, and was living in Bedford in 1910.

In the late 19th century, Dudley Leavitt Pickman, descendant of an old Salem merchant family, [4] and his wife Ellen fell in love with the land. They bought a substantial parcel (mostly Winthrop's land and a portion of Dudley's grant). Huckins Farm was a part of this purchase. A direct descendant of both Winthrop and Dudley, Pickman bought the land without knowledge of the Winthrop-Dudley grant. [5] He discovered later that he had purchased his ancestors' lands. About 1889, he had the Two Brothers Rocks inscribed with the names "Dudley" and "Winthrop" as well as the year 1638, as noted in the Bedford Town Report in 1889. [6]

The land was used as a dairy farm and apple orchard, in addition to the fields, pasture land, bog garden, and ponds. Chestnut trees lined the old road between the fields. A portion of Dudley Road was named Chestnut Avenue around that time. Today's Dudley Road and Winthrop Avenue in Bedford, as well as Pickman Drive, are named for these families.

A large portion of the Pickman land, Huckins Farm, was sold to a developer for condominium development in 1987, and other parcels including the large Pickman house (Stearns Farm) were sold to private parties. 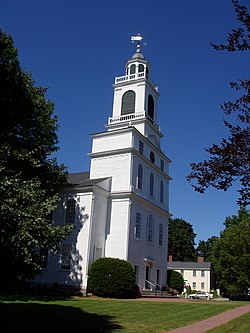 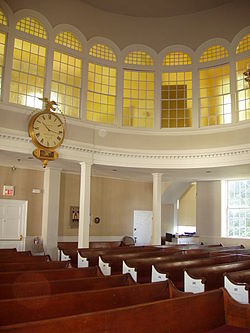 "By the rude bridge that arched the flood, their flag to April's breeze unfurled - here once the embattled farmers stood, and fired the shot heard 'round the world." - Ralph Waldo Emerson

The Bedford flag on display at the Bedford Free Public Library is the oldest known surviving intact battle flag in the United States. It is celebrated for having been the first U.S. flag flown during the American Revolutionary War, as it is believed to have been carried by Nathaniel Page's outfit of Minutemen to the Old North Bridge in Concord for the Battle of Concord on 19 April 1775.

Though the flag previously had a border of silver tassels, the tassels were cut from it to adorn the dress of Page's daughter.

When Governor Winthrop and his Deputy Thomas Dudley viewed their lands in early 1638, they decided to use two great stones on the eastern bank of the Concord River to divide the property. Winthrop claimed the land to one side of one rock; Dudley claimed the land on the other side of the other rock. They named the rocks "The Two Brothers". Over the years, the two men had many differences; however, they learned to work together and even considered themselves "brothers" by their children's marriage. The rocks have come to symbolize the men's spirit of cooperation and democracy. The Two Brothers Rocks can still be seen near the banks of the Concord River in the Great Meadows National Wildlife Refuge. This site has recently been restored for an Eagle Scout project by Dennis Warner in collaboration with the U.S. Fish and Wildlife service, and the Bedford Historic Preservation Commission.[ citation needed] The area around the site was listed on the National Register of Historic Places in 2010 as the Two Brothers Rocks–Dudley Road Historic District. [8]

Access to the site is possible through the Altmann Conservation Area, named after Madeleine Altmann and source of much of her video art.

The early settlers called this area along the Concord River the "Great River Meadow" because they could harvest hay along the grass banks when the water retreated each summer. Today, this 12-mile (19 km) stretch of freshwater wetlands is a sanctuary for migratory birds and wildlife. Deer, cottontail rabbit, fox, raccoon, muskrat, beaver, weasel and over 200 species of birds may be seen here.

This traditional saltbox-style home at 295 North Road dates back to the early 18th century and was built by Job Lane (3), the grandson of one of Bedford's earliest settlers, Job Lane (1), a master carpenter. Job Lane (3) was a church deacon and also a town officer. His son Job Lane (4) was a Minuteman; he was wounded in the battle of Concord. The house and grounds, not far from Huckins Farm, has been restored and is open to the public from 2-4 pm on the second and fourth Sunday of the month, May through October. [9]

Early on the morning of April 19, 1775, an alarm sounded warning the people of Bedford that British soldiers were marching from Boston to Concord. Their captain, Jonathan Willson, told them, "It is a cold breakfast boys, but we'll give them a hot dinner." The Fitch Tavern is located in Bedford center, a little over a mile from Huckins Farm.

The ruins of this old mill over Vine Brook (on Wilson and Old Burlington Road) were added to the national historical register in 2003 ( see photo). A 1972 "Bedford Landmark Tour" says, "Site of the Wilson mills dating from about 1685; mills, dam, and pond passed from the Wilson family about 1770 to Oliver Bacon, then bought by Jonas Gleason (1782) and by Simeon Blodgett (1816); through the years, the site was operated as a grist mill, a saw mill, and later a cider mill." [10]

Bedford is a relatively circular town. Its neighbors, clockwise, starting from 12 o'clock, are Billerica, Burlington, Lexington, Lincoln, Concord and Carlisle.

There were 4,621 households of which 34.1% had children under the age of 18 living with them, 64.4% were married couples living together, 7.3% had a female householder with no husband present, and 26.0% were non-families. 21.8% of all households were made up of individuals and 10.2% had someone living alone who was 65 years of age or older. The average household size was 2.60 and the average family size was 3.04.

The town uses an open town meeting as its legislature. The executive branch consists of a Board of Selectmen who oversee a Town Manager.

Bedford was the home of a Consolidated Mail Outpatient Pharmacy (CMOP). It was the part of an initiative by the Department of Veterans Affairs to provide mail order prescriptions to veterans using computerization at strategic locations throughout the United States. It has moved to the Lowell area as a result of the Veterans Administrations Cares Mission and is no longer in Bedford.

As part of the Middlesex 21st District, Bedford is represented by Ken Gordon in the Massachusetts House of Representatives.

Bedford Public Schools operate Bedford's public school system. It consists of four buildings: Lt. Eleazer Davis Elementary (K–2), Lt. Job Lane Elementary (3–5), John Glenn Middle School (6–8), and Bedford High School (9–12). Some students from Hanscom Air Force Base, which is partially located in Bedford, join Bedford residents at Bedford High for 9th grade and beyond. There is a METCO program, where students from Boston come to the Bedford schools, starting in kindergarten and staying with the class until graduation. Bedford is also part of the school district of Shawsheen Valley Technical High School which is in nearby Billerica.

The former Center School was deactivated in the 1970s, and is today the Town Center and Recreation Department [22] Nathaniel Page School was similarly deactivated in about 1982 and today is a condominium community. Davis, Lane and Page elementary schools were all k–6 at one time.

John Glenn Middle School (originally called Bedford Junior High School) is named for John Glenn, formerly the Superintendent of Schools in Bedford, not for the U.S. Senator and astronaut. The Davis and Lane (and former Page) schools are named for local officers who took part in the Battle of Concord on 19 April 1775.

Bedford Depot Park at the end of the Minuteman Bikeway

Bedford is slightly northwest of the intersection of I-95 (also known as MA-128) and MA-4/ MA-225 (which cross in Lexington). Important roads through town include US-3 (an expressway) and MA-62.

The town is served by the 62 and 62/76 lines of the MBTA's bus service. The MBTA operates the Route 351 express bus service, from Alewife; the bus terminates at Oak Park Drive, Bedford Woods, and EMD Serono; this service operates only on the morning and evening weekday rush hour times and connects to the Red Line at Alewife.

A snowstorm on 10 January 1977 prompted the end of passenger service on the Lexington Branch of the Boston & Maine Railroad (see additional notes under Boston and Lowell Railroad). The line was embargoed four years later. In 1991, the branch was railbanked by the Interstate Commerce Commission. It is now used for the Minuteman Bikeway. In the early 20th century, the Middlesex & Boston Street Railway line ran generally down Great Road (Routes 4 and 225), with lines from as far west as Hudson running into Lexington and beyond.

Other historic transportation systems through Bedford included the narrow-gauge Billerica and Bedford Railroad and the Middlesex Turnpike.