Canoes along the Au Sable River 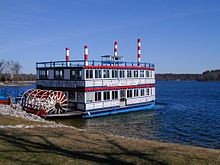 The Au Sable River in Michigan, United States runs approximately 138 miles (222 km) [2] through the northern Lower Peninsula, through the towns of Grayling and Mio, and enters Lake Huron at Au Sable. It is considered one of the best brown trout fisheries east of the Rockies [3] and has been designated a blue ribbon trout stream by the Michigan Department of Natural Resources. [4] In French, au sable literally means "at the sand." A 1795 map calls it the Beauais River.

The Au Sable then flows mostly east through Oscoda County, then south and east through Alcona County and Iosco County. The river's watershed also drains portions of Montmorency County and Ogemaw County.

Most of the main branch of the Au Sable flows through or adjacent to the Huron-Manistee National Forest. 23 miles (37 km) of the river, from the Mio Pond downstream to the Alcona Pond, was designated as a National Wild and Scenic River on October 4, 1984. The watershed provides habitat for bald eagles and the endangered Kirtland's warbler. Five percent of the land in the watershed is National Forest and 29% is state forest.

It is a designated trout stream, and many canoe liveries exist along the river, which offer canoe trips from a few hours to as long as a week. The river was originally a grayling fishery with brook trout being released in the 1880s. By 1908 the grayling were gone although they were reintroduced in 1987. (See Grayling, Michigan for more information on the Grayling and the fish hatchery.) Brown trout is the current main catch. The Lumberman's Monument, in honor of the lumberjacks that first populated the area, is located on the river about 15 miles (24 km) west of Oscoda. Lumbering along the river began in the 1860s and was finished by the 1910s.

The Au Sable River is also the site of a yearly 120-mile (190 km) pro-am canoe race, the Au Sable River Canoe Marathon, which begins at 9:00 p.m. and runs through the night into the next day. Winning times have ranged from 14 to 21 hours. The race was first run in 1947.

There are six hydro-electric power plants in the Au Sable River basin, with a total installed capacity of 41 MW and an average annual energy output of 500 GJ. The six reservoirs were constructed between 1911 and 1924.

The Au Sable has about 350 miles (560 km) of tributary streams including the Pine River.

Ordered from upriver to downriver, all belonging to the power company Consumers Energy:

The River That Changed the World exhibit, on the Au Sable River, at the Michigan History Museum

The river has five historical markers on it: 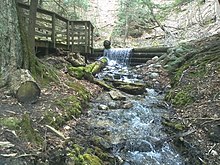