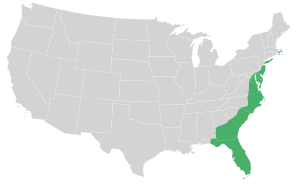 Wheat field near Centreville on the Eastern Shore of Maryland, with flat terrain typical of the Atlantic coastal plain
Main article: Atlantic Plain

The Atlantic coastal plain is a physiographic region of low relief along the East Coast of the United States. It extends 2,200 miles (3,500 km) from the New York Bight [2] [3] southward to a Georgia/Florida section of the Eastern Continental Divide, which demarcates the plain from the ACF River Basin in the Gulf Coastal Plain to the west. The province is bordered on the west by the Atlantic Seaboard fall line and the Piedmont plateau, to the east by the Atlantic Ocean, and to the south by the Floridian province. The Outer Lands archipelagic region forms the insular northeasternmost extension of the Atlantic coastal plain.

The province's average elevation is less than 900 meters above sea level and extends some 50 to 100 kilometers inland from the ocean.[ citation needed] The coastal plain is normally wet, including many rivers, marsh, and swampland.[ citation needed] There are no mountains in this region of North America. [4] It is composed primarily of sedimentary rock and unlithified sediments and is primarily used for agriculture. [5] The Atlantic Coastal Plain includes the Carolina Sandhills region [6] as well as the Embayed and Sea Island physiographic provinces. The Atlantic Coastal Plain is sometimes subdivided into northern and southern regions, specifically the Mid-Atlantic and South Atlantic coastal plains.