The Assabet River is a small river about 20 miles (30 km) west of Boston, Massachusetts, United States. The river is 34.4 miles (55.4 km) long. [1] OARS: the Organization for the Assabet, Sudbury and Concord Rivers, headquartered in West Concord, Massachusetts, is a non-profit organization dedicated to the preservation, protection, and enhancement of the natural and recreational features of these three rivers and their watershed. The Assabet and Sudbury Rivers merge in Concord to become the Concord River.

The river has had many variations of the same name over the centuries, without anyone knowing for sure what it means. Some traditional meanings are associated with the place. Assabet is said to come from the Algonquian word for "the place where materials for making fish nets comes from." Other traditional meanings are "at the miry place" or "it is miry." It is also possible to decode this name in the southern New England branch of Algonquian, spoken by the Nipmuc, Native Americans who once fished there. The name is segmented assa-pe-t from assa, "turn back", pe, a short form of nippe, "water", used in compounds, and a locative suffix, -t, a shorter form of -et after the vowel. The meaning would be "at the place where the river turns back." During floods the Assabet River reaches peak height sooner than the Sudbury River, so that at the junction of the two rivers the Sudbury's direction of flow can be temporarily reversed. A counter-argument is that the name was a corrupted spelling of Elizabeth. On various historic maps and documents the name has been spelled as Asibath, Assabeth, Asabett, Assabet, Elizbeth, Elizabet, Elizabeth, and Isabaeth. [2] The form of spelling was not uniform until at least 1850. [3] Historic maps up to 1830 are mostly showing Elizabeth River, but by 1856, consistently Assabet River. [4] In present-day Stow, the Elizabeth Brook flows into the Assabet River.

As of 2017 there are nine dams on the Assabet River. Seven were built to power mills. Present-day names: Aluminum City, Allen Street, Hudson, Gleasondale, Ben Smith, Powdermill and Damonmill/Westvale. Two are modern dams for flood control: Nichols and Tyler. The Damonmill Dam is partially breached, so it does not retain water, although it slows flow at flood times. A tenth mill dam, the Paper Mill Dam, in Maynard, was destroyed by the 1927 flood. As of 2017, 39 road bridges, two Assabet River Rail Trail bridges, one abandoned railroad bridge (Hudson) and one active railroad bridge (Concord) cross the river. Its watershed covers 177 square miles (460 km2). The Assabet marshes in Stow total about 900 acres (360 ha), and the Assabet River National Wildlife Refuge and environs in Stow, Maynard, Sudbury, and Marlborough total about 2,600 acres (1,100 ha).

The Powdermill dam was constructed for the American Powder Mills complex of 40 buildings on 400 acres (160 ha) along both sides of the river through the towns of Acton, Concord, Maynard and Sudbury. These buildings were used for manufacture of gunpowder from 1835 to 1940. Evidence of the 23 recorded explosions during that period remains at a few locations along the river. [5] This dam is owned by Acton Hydro Company Inc., which is in the process of renovating the hydropower facility in order to generate electricity. None of the other historic mill dams have any current function.

Nathaniel Hawthorne wrote in its praise: "Rowing our boat against the current, between wide meadows, we turn aside into the Assabeth. A more lovely stream than this, for a mile above its junction with the Concord, has never flowed on earth."

Henry David Thoreau often took his students, including Louisa May Alcott on educational boat trips up the Assabet River," [6] and he wrote a poem entitled "The Assabet" to a love interest stating: "Up this pleasant stream let's row, For the livelong summer's day, Sprinkling foam where'er we go, In wreaths as white as driven snow". [7] 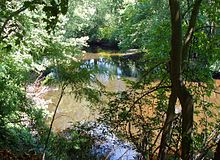 According to U.S. Geological Survey records the average flow at the gauge in Maynard is 200 cubic feet (5.7 m3) per second. February, March and April average > 300 cubic feet (8.5 m3) per second. July, August and September average <100 cfs, with weeks at a time < 40 cubic feet (1.1 m3) per second. Five municipal wastewater treatment plants discharge cleaned water into the Assabet River (three upstream of the Maynard gauge). In summer months this cumulative contribution of more than 10,000,000 US gallons (38,000,000 L) per day (roughly 10 cubic feet (0.28 m3) per second) can be more than half of the river's total volume.

The official designation of major flooding on the Assabet River is a water depth of more than seven feet and a flow rate of 2,300 cfs at the gauge maintained by the U.S. Geological Survey on a site in the river behind McDonald's Restaurant. The gauge site is downstream of 114 of the 177 square miles making up the Assabet River drainage. [8] Major tributaries below the gauge, which can contribute to downstream flooding, are Fort Pond, Spence and Nashoba Brooks.

1927: According to the National Weather Service, “The 1927 hurricane season brought a tropical storm that swept northward across western New England on Nov. 3-4, 1927. As its warm, humid air rose over the mountains and hills, torrential rains fell, causing severe flooding over extensive areas in virtually all of northern New England and the upper Hudson basin in New York. Much of New England had been soaked by rains throughout October. In all, 85 people were lost.” Locally, the November 11, 1927 issue of The Maynard News reported bridges damaged and water flooding the Mill buildings closest to the river, and also the gunpowder factory a bit further east on Powdermill Road (Route 62). The Waltham Street Bridge situated next to what is now Tedeschi Food Mart, Maynard, had been built in 1840, then widened to add an electric trolley track and sidewalk in 1900. It was destroyed by the flood. A new bridge was installed in 1928, since replaced in 2013. [8]

1936: “The Great Flood” was described as the worst flood in New England since 1850. Damage in Massachusetts was estimated at in excess of $200,000,000. In today’s dollars that would have been billions. The winter of 1935-36 had been hard, with deep snowfalls and long cold snaps that turned streams and rivers to solid ice. Spring came early, with mild weather and heavy rain. By mid-March, rivers were rising across the state. Locally, bridges were damaged and roads washed out. [8]

1955: From a Maynard resident “In August of 1955 my parents brought me to see water flowing over the bridge. We stood on the south side, on Waltham Street.” The high water crest of 8.94 feet from Hurricane Diane was the highest the river has been since record keeping began in 1942. [8]

1968 and 1979: These were the first major floods after two flood control dams were built upstream. Both peaked at 8.1 feet at the gauge. In Maynard, the first put water over the retaining wall next to the mill buildings, necessitating sandbagging and pumping to save factory equipment belonging to Digital Equipment Corporation, which owned the entire mill building complex at the time. The equally high water of January 1979 did not get into the mill because Digital had built the wall higher – on its side. Walnut Street was again under water, and AT&T was sandbagging its building on the Walnut Street side. [8]

Flood control: Three major and eight minor flood control sites hold back high water in times of floods. The George H. Nichols Dam was built in Westborough in 1968, the Tyler Dam in Marlborough in 1965 and the Delaney Complex (on the Elizabeth Brook tributary) in Stow in 1971. The minor sites are on other tributary brooks. Collectively, these have a flood hold-back capacity in excess of 3.5 trillion gallons. The Nichols Dam also serves as a water-providing reserve in times of low water, to help maintain some flow in the river. The two most recent major floods were in 1987 and 2010; for both, water level at the gauge peaked at 7.1 feet, and volume was 2,500 cubic feet per second. [8]

Water caltrop, more commonly known as water chestnut, species Trapas natans, is an invasive waterplant from western Asia. The initial introductions in the U.S. were in the 1870s in Cambridge, MA, followed by deliberate introduction into ponds near the Concord and Sudbury Rivers. [9] This is now an invasive, habitat-destroying plant across many of the eastern states. [10] On the Assabet River, OARS (Organization for the Assabet, Sudbury and Concord Rivers) organizes an annual plant pulling event in early July. Volunteers in canoes hand-pull the surface-floating rosettes of leaves and nuts before the nuts mature and fall to the bottom. [11]

Alewife, Alosa pseudoharengus is an anadromous species of herring found in North America, anadromous meaning that it mates and is born in fresh water, but live most of its life in saltwater. [12] In pre-Colonial and early Colonial times, alewife swam from the Atlantic Ocean upstream into the Merrimack, and then the Concord and then the Assabet and Sudbury Rivers for the spring mating season. The Industrial Age brought dams to the rivers in order to power mills. Because access to the upper reaches of the rivers was denied the alewives became locally extinct.

Beaver, Castor Canadensis, was common in pre-colonial times. The town of Concord was in part started as a trading site between Native Americans and the English colonists. One estimate is that circa 1630, more than 10,000 beaver pelts per year were being taken in land that now makes up Massachusetts and Connecticut. Due to aggressive hunting, beaver were extirpated (regionally extinct) from all of Massachusetts by 1750. Reintroduction to the state started in the west around 1930, then spread east. Beaver now populate the Assabet River watershed to the point that stream culverts under roads need to be periodically cleared of attempts at dams, and trees on land adjacent to the river are downed for food, dam construction and den building. Licensed trappers are hired to remove nuisance beaver families. Where not intruding on human space, beaver improve the local ecology. Dams create wetlands which foster wildlife diversity, contribute water to the underlying aquifers, and combat summer droughts.