The Arts festival in Marrakech, now the Marrakech Biennale, first took place in 2005. [1] It was set up by Vanessa Branson and Abel Damoussi with the help of curator Danny Moynihan and Liberatum creator Pablo Ganguli. It is the first major Trilingual (English, Arabic & French) festival in North Africa. [2] It focuses on cutting-edge contemporary Visual Art, Literature, and Film. It consists of a main Visual Arts Exhibition, other arts exhibitions, installations and happenings, discussions, debates and screenings based in the eclectic venues and settings that Marrakech has to offer. AiM is now known as Marrakech Biennale.

The exhibition of the Wonderful Fund Collection opened AiM 2005 at the Museum of Marrakech. This collection of 100 works of contemporary art - purchased by Vanessa Branson and Prue O'Day as curators for the London-based collectors group, was exhibited for the first time ever at AiM. The collection was not put together as an investment, but as a platform for discovery and a means of supporting young artists. There were 64 artists representing 17 countries in the Collection and included work from artists such as Sarah Lucas, Grayson Perry, Jake & Dinos Chapman, Tracey Emin and Gavin Turk.

The Literary Programme was organised by Pablo Ganguli, highlights included a panel discussion on the future of English and literature and how the media can play a key role in its promotion, chaired by Geordie Greig with author Hanif Kureishi, Alexandra Pringle, Peter Florence, Simon Prosser, Ekow Eshun, Esther Freud, Antony Gormley, Annie Lennox and Hari Kunzru; and a conference on the importance of the translation of Arabic literature and poetry in the western world and a discussion on the state of Arab literature, featuring Ahmed El Madini, Rabii Mobarak, Susanna Nicklin, Wassini Laraj, Tayeb Salah and Mahi Binebine.

The 2007 festival bought together acclaimed writers, directors and artists from across Morocco and the world together in a rich forum of debate and cooperation. It grew in the number of participants and attendees and was Coordinated by Clare Azzougarh.

The 3rd Edition of the AiM International Biennale 2009 directed by Vanessa Branson and coordinated by Clare Azzougarh was launched in November 2009. The main Visual Arts Exhibition, "A Proposal for Articulating Works and Places" was curated by Abdellah Karroum [4] and held in the Palais Bahia. The Exhibition premiered works by Francis Alys, Yto Barrada, Lordana Longo and Batoul S'Himi amongst many others. Other Events included Julien Fisera and Laurent P. Berger Directing the Stories of Order and Dissorder which placed storytellers in taxis around the city; a Sketch Gallery London Curated by Victoria Brooks, Giles Round and Mark Ariel Waller bought their project 'Taverna Especial to an ancient Riad in the Medina. Attendees also include Turner-nominee Isaac Julien, BBC TV arts executive Alan Yentob and Moroccan film director Faouzi Bensaidi, actress Kim Cattrall and artist and film-maker Julian Schnabel, who took part in many different, discussions and debates at venues including ESAV film school, Riad El Fenn and Ksour Agafay.

The 4th Edition of The Marrakech Biennale opened on 29 February and was co-ordinated by Jessica Bannister. The 5 days opening was titled 'Surrender' and consisted of Performances, Debates, Talks and Screenings as well as the opening of the Main Visual Arts Exhibition on 1 March. Higher Atlas, a major exhibition curated by Dr Nadim Samman and Carson Chan took place at the Théâtre Royal, Koutoubia Cisterns, Bank Al-Maghrib, Cyber Parc Arsat Moulay Abdeslam and Dar Al-Ma’mûn in Marrakech (1 March-3 June 2012). High connotes reverie and transcendence. Higher Atlas suggests a cartography of the beyond. All works were new site-specific commissions, conceived and created on location with local craftspeople and manufacturers. Over thirty international artists, architects, writers, musicians and composers showed their work, including Karthik Pandian, Juliana Cerqueira Leite, Juergen Mayer H, Andrew Ranville, Felix Kiessling, Finnbogi Petursson and Turner Prize nominated Roger Hiorns. The exhibition sought to engage in an expansive dialogue with the city.

Art by Faouzi Laatiris for the 4th edition of the Marrakech Biennale. credit: r.v.wienskowski

Voice in the Wilderness For the Marrakech Biennale 5

The 5th edition of the Marrakech Biennale took place, from February 28 to March 30, 2014, under the patronage of His Majesty King Mohammed VI.

The MB5 was attended by over 450 artists including more than 100 Moroccan artists, it had over 30,000 visitors. It mobilized more than 80 sponsors and patrons and invited over 150 international and national journalists and professionals. Thanks to an extensive programme, as well as the quality of the artists and media coverage, the event got ranked among the top 20 biennials in the world. [5]

Curated by Hicham Khalidi The exhibition, curated by Hicham Khalidi, invited 43 artists from Morocco and several other countries. The vast majority of the artworks were site specific, produced in and inspired by the context of Marrakech. The artpieces were diffused between the venues of the 16th century El Badi Palace, the Dar Si Said, which houses the Museum of Moroccan Arts, the former Bank Al Maghrib in the middle of the Jemaa El Fna square - This square is the pulsing heart of the Medina of Marrakech, and it has been defined by UNESCO as a Masterpiece of the Oral and Intangible Heritage of Humanity- and a unique art deco building in the area of Gueliz called L'Blasa, Which is now the headquarters of the 6th edition of the Marrakech Biennale in 2016. 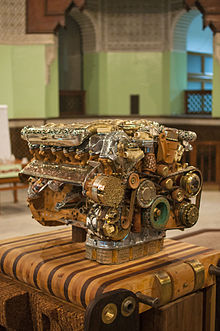 Cinema and Video considered contemporary creations from North Africa in dialogue with other regions, particularly Sub-Saharan Africa and the Middle East. With the participation of the pioneering founder of the festival of video installation Casaprojecta, Jamal Abdenassar, video installation as a hyphen between film, visual art, and performing art was very present in this edition. The film screenings and roundtables were combined by a carte blanche to the legendary Cinematheque de Tanger. With a Carte Blanche to "La Cinematheque de Tanger

Led by the Moroccan writer and theater author Driss Ksikès, the Literary discipline promoted access to public space through a series of roundtables as well as performative lectures, connecting performing art and literature. These events took place in the Royal Theater, a contested theater and opera house built in the late 70s yet never used as such. Playing on this, it was also the main venue of the previous edition of the Marrakech Biennale. The literature section also took place in Riad Denise Masson, the house of the first woman who ever translated the Koran into French and Dar Cherifa, the oldest house of the Medina. Finally, the exhibition opened to the most public space of the city as it merges with the visual art exhibition in the main square Jemaa El Fna, fusing the new and the old.

Performing Arts was organized by the founder of Alwaln’art, the public space festival in Marrakech, Khalid Tamer. He created a circulation that reimagines the relationships of public space to both outsiders and natives between several venues of the Biennale. This movement is organized as a dialogue between the contemporary and the traditional, connecting the two areas where the Biennale took place: the more traditional space of the Medina and the modern area of Gueliz, the first area built outside of the Medina fortification starting in 1913. The main purpose of this circulation in the public space is to invite the immediate and spontaneous audience to participate in the Biennale by interconnecting the main venues.

The 6th edition of the Marrakech Biennale took from 24 February to 8 May 2016. It was curated by Reem Fadda, the Associate Curator of Middle Eastern Art for the Guggenheim Abu Dhabi Project. [6] The programming took a multidisciplinary approach to unite and introduce artists and works primarily from the Arab World, the Mediterranean region and Sub-Saharan Africa.