Spain formally claimed the archipelago of San Andres and Providencia in 1510, a few years after the voyages of Christopher Columbus. In 1544, the territory was placed under the administration of the Captaincy General of Guatemala. During the early years, Spain concentrated on exploring and colonizing the mainland and hardly settled the islands.[ citation needed]

In 1630, English Puritans arrived in Providence Island, under the aegis of the Providence Island Company. The Puritans decide to settle the tropical islands, rather than cold, rocky New England, but the Providence Island colony did not succeed in the same way as the Massachusetts Bay Colony. They established slave-worked plantations and engaged in privateering, which led to the Spanish and Portuguese conquering the colony in May, 1641. [9] In 1670, English buccaneers, led by Henry Morgan, took over the islands, which he used as a base to attack Panama. The buccaneers abandoned the islands by 1672. There is no record of anyone inhabiting the islands from then for another century.

In 1775, Lieutenant Tomás O'Neil, a Spaniard of Irish descent, was given military command of the islands and, in 1790, was named governor. He requested the transfer of the islands to the jurisdiction of the Viceroyalty of New Granada, which was granted in 1803. That year, Spain assigned the islands, together with the province of Veraguas (western Panama and the east coast of Nicaragua), to the Viceroyalty of New Granada. The territory was administered from the province of Cartagena. Soon, trade links with Cartagena were greater than those with Guatemala.[ citation needed]

On 4 July 1818, a French corsair, Louis-Michel Aury, with 400 men and 14 ships flying the Argentine flag, captured Old Providence and St. Catherine islands. The island was populated by white English-speaking Protestants and their slaves. Aury and his team used the islands as their new base from which to pursue Central American independence. However, his efforts to also support Bolivar in his fight for Venezuelan and Colombian independence were repeatedly turned down.[ citation needed]

After the Spanish colonies became independent, the inhabitants of San Andrés, Providence and St. Catherine voluntarily adhered to the Republic of Gran Colombia in 1822, which placed them under the administration of the Magdalena Department. The First Mexican Empire, which was succeeded by the United Provinces of Central America (UPCA), also claimed the islands. Gran Colombia, in turn, protested the UPCA's occupation of the eastern coast of Nicaragua. The UPCA broke up in 1838 to 1840, but Nicaragua carried on the dispute, as did Gran Colombia's successors: New Granada and Colombia. A local administration (intendencia) was established in the islands in 1912 by Columbia.[ citation needed]

In 1928, Colombia and Nicaragua signed the Esguerra-Bárcenas Treaty, which gave control of the islands to Colombia. However, when the Sandinista government assumed power in the 1980s, Nicaragua repudiated the treaty. Colombia argues that the treaty's final ratification in 1930 (when the US forces were already on their way out) confirms its validity. Colombia and Honduras signed a maritime boundary treaty in 1999, which implicitly accepts Colombian sovereignty over the islands.[ citation needed]

In 2001, Nicaragua filed claims with the International Court of Justice (ICJ) over the disputed maritime boundary and claimed 50,000 km2 (19,305 sq mi) in the Caribbean, including the San Andrés and Providencia Archipelagoes. Colombia responded that the court has no jurisdiction over the matter and increased its naval and police presence in the islands. Colombia also defended its claim in the ICJ. On 13 December 2007, the ICJ ruled that the islands were Colombian territory but left the maritime border dispute unresolved. [10] On 19 November 2012, the ICJ held that Colombia had sovereignty over the islands.

In the 19th century, the United States claimed several uninhabited locations in the area under the Guano Island Act, including several now claimed by Colombia. [11] In 1981, the US ceded its claims to Serrana Bank and Roncador Bank to Colombia and abandoned its claim to Quita Sueño Bank. [12] The US still maintains claims over Serranilla Bank and Bajo Nuevo Bank and considers them both to be unincorporated territories of the United States. [11]

In 1903, the local Raizal population rejected an offer from the US to separate from Colombia in the wake of Panama's secession from Colombia. However, the island's native population soon changed its mind when the policies of successive Colombian governments tried consistently to modify the majority Raizal and British ethnic composition of the Islands by the extensive migration of Spanish-speaking mainland Colombians. The efforts at assimilation and immigration were led largely by Catholic missionaries, which angered the Protestant native population. [13] [14]

A member of the departmental assembly for 15 years, Pedro Gallardo Forbes, of the Regional Integration Movement (MIR), won the 28 October 2007 gubernatorial election, with support from the Colombian Conservative Party and the Radical Change party. He succeeded a governor from the Colombian Liberal Party. He got 8,187 votes (38.93%), Aury Guerrero Bowie (Liberal Party, with support from the Democratic Colombia Party) 8,160 votes (38.8%), and Jack Housni Jaller ( Social National Unity Party) 4,063 votes (19.3%). Only 21,991 out of 41,197 potential electors voted in the gubernatorial election. [15] [16]

Besides the San Andrés and Providencia island groups, there are eight atolls that belong to the Department, including submerged Alice Shoal.[ citation needed] 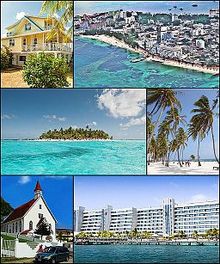 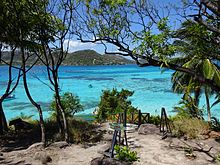 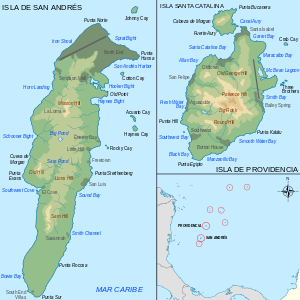 Cities of San Andrés and Providencia

Before 1960, the population of the islands was almost entirely Raizals, who are an Afro-Caribbean group, Protestant in religion, speaking San Andrés-Providencia Creole. There is a minority of white English-speaking Protestants of British descent. Colombia has promoted the migration of Spanish-speaking mainlanders, with Catholic missions participating since 1947. This policy seems to be an answer to growing discontent within the Raizal community that could strengthen separatist movements; a raizal majority would in this case win a pro-independence referendum but this could be neutralized by outnumbering them with mainland Colombians.[ citation needed]

By 2005, Raizals were only 30% of the 60,000 or more inhabitants of the islands, with the rest being mainland Colombians and English-speaking whites of British descent. [18] Raizals can speak both Spanish and English.[ citation needed]

The airport serves the towns of San Andrés and San Luis, but also commercially serves the nearby island of Providencia Island, all being major tourist and vacation spots for South and Central American tourists. Gustavo Rojas Pinilla International Airport is also known as Sesquicentenario International Airport. The airport is the 6th busiest airport in Colombia in terms of passengers, with 836,234 in 2006. Most of these passengers come from the continental part of the country, due to poor international direct service to the island. Many international tourists have to fly to one of Colombia's or Panama's largest airports (Bogotá, Medellín, Cali, Cartagena, Panama City) to be able to reach the islands. In recent years San Andrés has started to receive seasonal charter flights, mainly from Canada and a few Central American countries.[ citation needed]

The airport is one of Colombia's fastest growing airports with a 13.4% increase in the number of passengers between 2005 and 2006.[ citation needed]