Table of Contents ⇨
Artifacts related to the history, geography, folklore and cultural heritage of the United States of America
For other uses, see Americana (disambiguation). 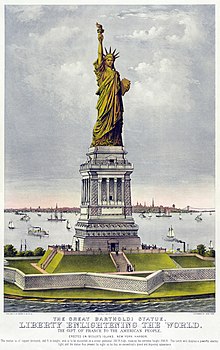 Liberty Enlightening the World: the famous New York landmark illustrated in a print by Currier and Ives

What is and is not considered Americana is heavily influenced by national identity, historical context, patriotism and nostalgia. The ethos or guiding beliefs or ideals which have come to characterize America, such as The American Dream, are central to the idea. American historian Hampton Sides wrote in Americana: Dispatches from the New Frontier:

The United States of America is such a glorious mess of contradiction, such a crazy quilt of competing themes, such a fecund mishmash of people and ideas, that defining us is pretty much pointless. There is, of course, a kind of faded notion of "Americana", one that concerns Route 66, diners, freak rock formations, and the like—but even in its halcyon days this "roadside attraction" version of America was never an accurate or nuanced distillation of our massively complicated culture.

There are scenes and places, wattages and personages, that belong—inextricably, unmistakably—to this country alone. There is an American quality, a tone, an energy ... instantly recognizable ..." [3][ page needed]

Many kinds of cultural artifacts fall within the definition of Americana: the things involved need not be old, but are usually associated with some quintessential element of the American experience. Each period of United States history is reflected by the advertising and marketing of the time, and the various types of antiques, collectibles, memorabilia and vintage items from these time periods are typical of what is popularly considered Americana. The Atlantic described the term as "slang for the comforting, middle-class ephemera at your average antique store—things like needle-pointed pillows, Civil War daguerreotypes, and engraved silverware sets". [4] Americana encompasses not only material objects but also people, places, concepts and historical eras which are popularly identified with American culture.

From the mid to late 20th century, Americana was largely conceptualized as a nostalgia for an idealized life in small towns and cities in the United States around the turn of the century, roughly in the period between 1880 and the First World War, popularly considered "The Good Old Days". [7] It was believed that much of the structure of 20th-century American life and culture had been cemented in that time and place. American author Henry Seidel Canby wrote:

"It is the small town, the small city, that is our heritage. We have made twentieth-century America from it, and some account of these communities as they were ... we owe our children and grandchildren." [8]

The nostalgia for this period was based on a remembrance of confidence in American life that had emerged during the period due to such factors as a sense that the frontier had finally been "conquered", with the U.S. Census Bureau's declaration that it was "closed" in 1890, as well as the recent victory in the Spanish–American War. [7] By 1912, the contiguous United States was at last fully politically incorporated, and the idea of the nation as a single, solid unity could begin to take hold.

As Canby put it,

Americans at this time "really believed all they heard on the Fourth of July or read in school readers. They set on one plane of time, and that the present, the Declaration of Independence, the manifest destiny of America, the new plumbing, the growth of the factory system, the morning paper, and the church sociable. It was all there at once, better than elsewhere, their own, and permanent. ... They had just the country they wanted...and they believed it would be the same, except for more bathtubs and faster trains, forever ... for the last time in living memory everyone knew exactly what it meant to be an American." [8]

"It’s no accident that my first novel was called Americana. This was a private declaration of independence, a statement of my intention to use the whole picture, the whole culture. America was and is the immigrant's dream, and as the son of two immigrants I was attracted by the sense of possibility that had drawn my grandparents and parents." (from Conversations With Don DeLillo) [9]

The zeitgeist of this idealized period is captured in the Disneyland theme park's Main Street, U.S.A. section (which was inspired by both Walt Disney's hometown of Marceline, Missouri and Harper Goff's childhood home of Fort Collins, Colorado), [10] as well as the musical and movie The Music Man and Thornton Wilder's stage play Our Town. [7] Especially revered in nostalgic Americana are small-town institutions like the barber shop, [11] drug store, soda fountain and ice cream parlor; [12] some of these were eventually resurrected by mid-twentieth century nostalgia for the time period in businesses like the Farrell's Ice Cream Parlour chain, with its 1890s theme. [13] 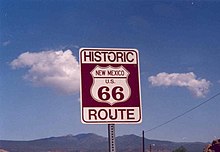 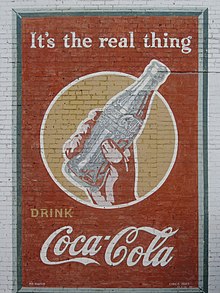 This Coca-Cola advertisement from 1943 is still displayed in Minden, Louisiana

By the middle of the 1940s, three-quarters of the records produced in America went into jukeboxes

Columbia of Carrick, mural of the personification of America, located in Pittsburgh, PA

George Washington on the 1928 dollar bill

Similar concepts in other nations