Table of Contents ⇨
Form of nationalism found in the United States
Not to be confused with American patriotism.

Flag of the United States

The United States traces its origins to the Thirteen Colonies founded by Britain in the 17th and early 18th century. Residents identified with Britain until the mid-18th century when the first sense of being "American" emerged. The Albany Plan proposed a union between the colonies in 1754. Although unsuccessful, it served as a reference for future discussions of independence. 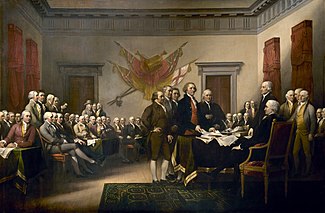 John Trumbull's Declaration of Independence is often identified as a depiction of the signing of the Declaration, but it actually shows the drafting committee presenting its work to the Congress [4]

Soon afterward, the colonies faced several common grievances over acts passed by the British Parliament, including taxation without representation. Americans were in general agreement that only their own colonial legislatures—and not Parliament in London—could pass taxes. Parliament vigorously insisted otherwise and no compromise was found. The London government punished Boston for the Boston Tea Party and the Thirteen Colonies united and formed the Continental Congress, which lasted from 1774 to 1789. Fighting broke out in 1775 and the sentiment swung to independence in early 1776, influenced especially by the appeal to American nationalism by Thomas Paine. His pamphlet Common Sense was a runaway best seller in 1776. [5] Congress unanimously issued a Declaration of Independence announcing a new nation had formed, the United States of America. American Patriots won the American Revolutionary War and received generous peace terms from Britain in 1783. The minority of Loyalists (loyal to King George III) could remain or leave, but about 80% remained and became full American citizens. [6] Frequent parades along with new rituals and ceremonies—and a new flag—provided popular occasions for expressing a spirit of American nationalism. [7]

The new nation operated under the very weak national government set up by the Articles of Confederation and most Americans put loyalty to their state ahead of loyalty to the nation. Nationalists led by George Washington, Alexander Hamilton and James Madison had Congress call a constitutional convention in 1787. It produced the Constitution for a strong national government which was debated in every state and unanimously adopted. It went into effect in 1789 with Washington as the first President. [8]

In an 1858 speech, future President Abraham Lincoln alluded to a form of American civic nationalism originating from the tenets of the Declaration of Independence as a force for national unity in the United States, stating that it was a method for uniting diverse peoples of different ethnic ancestries into a common nationality:

If they look back through this history to trace their connection with those days by blood, they find they have none, they cannot carry themselves back into that glorious epoch and make themselves feel that they are part of us, but when they look through that old Declaration of Independence they find that those old men say that "We hold these truths to be self-evident, that all men are created equal", and then they feel that moral sentiment taught in that day evidences their relation to those men, that it is the father of all moral principle in them, and that they have a right to claim it as though they were blood of the blood, and flesh of the flesh of the men who wrote the Declaration, and so they are. That is the electric cord in that Declaration that links the hearts of patriotic and liberty-loving men together, that will link those patriotic hearts as long as the love of freedom exists in the minds of men throughout the world.

White Southerners increasingly felt alienated—they saw themselves as becoming second-class citizens as aggressive anti-slavery Northerners tried to end their ability to take slave property to the fast-growing western territories. They questioned whether their loyalty to the nation trumped their loyalty to their state and their way of life since it was so intimately bound up with slavery, whether they owned any slaves or not. [10] A sense of Southern nationalism was starting to emerge, though it was inchoate as late as 1860 when the election of Lincoln was a signal for most of the slave states in the South to secede and form their own new nation. [11] The Confederate government insisted the nationalism was real and imposed increasing burdens on the population in the name of independence and nationalism. The fierce combat record of the Confederates demonstrates their commitment to the death for independence. The government and army refused to compromise and were militarily overwhelmed in 1865. [12] By the 1890s, the white South felt vindicated through its belief in the newly constructed memory of the Lost Cause of the Confederacy. The North came to accept or at least tolerate racial segregation and disfranchisement of black voters in the South. The spirit of American nationalism had returned to Dixie. [13] 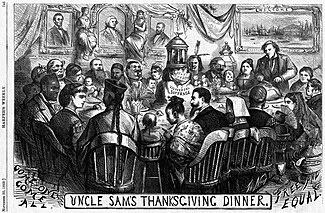 An 1869 Thomas Nast cartoon espousing American exceptionalism shows Americans of different ancestries and ethnic backgrounds sit together at a dinner table with Columbia to enjoy a Thanksgiving meal as equal members of the American citizenry while Uncle Sam prepares and sets the table, thus espousing an inclusive form of American nationalism that is civic in nature, where membership in the nation is not dependent upon ethnicity [14] [15]

The North's triumph in the American Civil War marked a significant transition in American national identity. The ratification of the Fourteenth Amendment settled the basic question of national identity, such as the criteria for becoming a citizen of the United States. Everyone born in the territorial boundaries of the United States or those areas and subject to its jurisdiction was an American citizen, regardless of ethnicity or social status (Indians on reservations became citizens in 1924 while Indians off reservations had always been citizens). [16]

With a very fast growing industrial economy, immigrants were welcome from Europe, Canada, Mexico and Cuba and millions came. Becoming a full citizen was an easy process of filling out paperwork over a five-year span. [17] 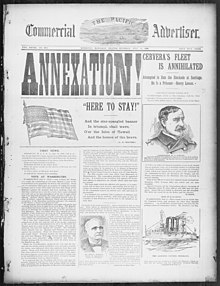 Newspaper reporting the annexation of the Republic of Hawaii in 1898

Nationalism in the contemporary United States

Nationalism and Americanism remain topics in the modern United States. Political scientist Paul McCartney, for instance, argues that as a nation defined by a creed and sense of mission Americans tend to equate their interests with those of humanity, which in turn informs their global posture. [19] In certain cases, it may be considered a form of ethnocentrism and American exceptionalism.

Due to the distinctive circumstances involved throughout history in American politics, its nationalism has developed in regards to both loyalty to a set of liberal, universal political ideals and a perceived accountability to propagate those principles globally. Acknowledging the conception of the United States as accountable for spreading liberal change and promoting democracy throughout the world's politics and governance has defined practically all of American foreign policy. Therefore, democracy promotion is not just another measure of foreign policy, but it is rather the fundamental characteristic of their national identity and political determination. [20]

The September 11 attacks of 2001 led to a wave of nationalist expression in the United States. This was accompanied by a rise in military enlistment that included not only lower-income Americans, but also middle-class and upper-class citizens. [21]

In a paper in the American Sociological Review, "Varieties of American Popular Nationalism", sociologists Bart Bonikowski and Paul DiMaggio report on research findings supporting the existence of at least four kinds of American nationalists, including, from smallest to largest groups: (1) the disengaged, (2) creedal or civic nationalists, (3) ardent nationalists, and (4) restrictive nationalists. [22]

Bonikowski and Dimaggio's analysis of these four groups found that ardent nationalists made up about 24% of their study, and was the larger of the two groups they describe as "extreme". Members of this group identified closely with the United States, were very proud of their country, and associated themselves strongly with factors of national hubris. However, although they felt that it was important that a "true American" speak English, and had lived most of their life in the U.S., they rejected the necessity of being Christian or being born in the country. Nevertheless, ardent nationalists perceived Jews, Muslims, agnostics and naturalized citizens as something less than truly American. The second class that Bonikowski and DiMaggio referred to as "extreme" was the smallest of the four classes, making up 17% of their respondents. The disengaged showed low levels of pride in the institutions of government and did not fully identify themselves with the United States. Their lack of pride extended to American democracy, American history, the political equality in the U.S., and the country's political influence in the world. This group was the least nationalistic of all four groups identified. [22] 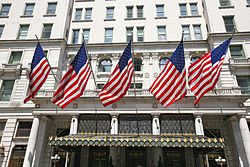 Studies supported the idea that the American flag increased nationalism. [23]

The two remaining classes were less homogeneous in their responses than were ardent nationalists and the disengaged. Restrictive nationalists had low levels of pride in American and its institutions, but defined a "true American" in ways that were markedly "exclusionary". This group was the largest of the four, including 38% of the study's respondents. While their levels of national identification and pride were moderate, they espoused beliefs that restricted who they considered to be "true Americans", excluding, for instance, non-Christians. The final group identified were creedal nationalists, who made of 22% of the study. This group believes in liberal values, is proud of the United States, and held the fewest restrictions on who could be considered to be a true American. They identified closely with their country, which they felt "very close" to, and were proud of its achievements. Bonikowski and Dimaggio dubbed the group "creedal" because their beliefs most closely approximated the precepts of what is widely taken to be the American creed. [22]

As part of their findings, the authors report that the connection between religious belief and national identity is a significant one. The belief that being a Christian is an important part of what it means to be a "true American" is the most significant factor which separates the creedal nationalists and the disengaged from the restrictive and ardent nationalists. They also determined that their groupings cut across partisan boundaries, and help to explain the what they perceived as the recent success of populist, nativist and racist rhetoric in American politics, exemplified in their view by the election of Donald Trump. Trump's expressed ideology closely resembles the beliefs of the largest group, the restrictive nationalists, and the sociodemographic breakdown of Trump's base of support is closely aligned with that of that group as well. [22] 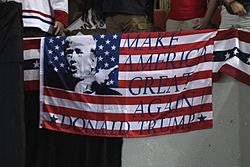 In a February 2017 article in The Atlantic, journalist Uri Friedman described "populist economic nationalist" as a new nationalist movement "modeled on the ' populism' of the 19th-century U.S. President Andrew Jackson" which was introduced in Trump's remarks to the Republican National Convention in a speech written by Stephen Miller and Steve Bannon. Miller had adopted Sessions' form of "nation-state populism" while working as his aid. [36] By September 2017, The Washington Post journalist Greg Sargent observed that "Trump's nationalism" as "defined" by Bannon, Breitbart, Miller and "the rest of the 'populist economic nationalist' contingent around Trump", was beginning to have wavering support among Trump voters. [37] Some Republican members of Congress have also been described as nationalists, such as Representative Steve King [38] and Senator Josh Hawley. [39]