Table of Contents ⇨
For those of a similar name, see Alan Parrish (disambiguation).
Parish in Louisiana

Allen Parish ( French: Paroisse d'Allen) is a parish located in the U.S. state of Louisiana. As of the 2010 census, the population was 25,764. [1] The parish seat is Oberlin. [2] Allen Parish is in southwestern Louisiana, southwest of Alexandria.

Allen Parish is named for former Confederate States Army general and Governor of Louisiana Henry Watkins Allen. It was separated in 1912 from the larger Calcasieu Parish to the southwest.

On September 27, 2008, the Allen Parish Tourist Commission opened Leatherwood Museum in Oakdale in a two-story house which served during the early 20th century as a hospital where women waited on the second-floor balcony to deliver their babies. [3]

The museum focuses on the history of agriculture and timber. Upstairs exhibits include photographs and a machine for cutting rice stalks, displays of early dental and medical equipment, pictures of war maneuvers during World War II, and a letter from Confederate States of America soldier David Dunn to his wife. Dunn was the grandfather of William T. Dunn, founder of Dunnsville, which became Oakdale. An education room contains displays on Louisiana High School Hall of Fame sports figures Curtis Cook of Oakdale, Johnny Buck of Kinder, and Hoyle Granger of Oberlin. Granger, an inductee of the Louisiana Sports Hall of Fame who starred for the Houston Oilers, addressed the grand opening of the museum. Other exhibits focus on the Coushatta Indians and Courir de Mardi Gras or the country way of celebrating Mardi Gras in Allen Parish. [3]

Adagria Haddock, director of the Allen Parish Tourist Commission, said that in addition to a hospital, the building formerly served as a boarding house and the home of the Leatherwood family. The house dates to July 3, 1888. The Leatherwoods turned the building into a museum in 1986, but it closed a decade later because of a lack of funding. In 2005, the house was donated to the Allen Parish Tourist Commission. [3]

The downstairs contains the furnishings of a typical family house of the time, with displays of clothing and other period artifacts. "We just wanted you to feel like home when you walked in and then go explore the museum part [upstairs]," Haddock told Alexandria Daily Town Talk. The facility is handicapped-accessible with an elevator. A state grant of $65,000 helped fund restoration. [3]

The most populated city as of the 2000 census was Oakdale, LA.

Allen was a strongly Democratic parish in Presidential and Congressional elections; the last Republican to win a majority in the parish before 2000 was Richard Nixon in 1972. Starting in 2000, when George W. Bush narrowly won the parish, Allen has become a Republican stronghold; John McCain won nearly two-thirds of the parish's vote in 2008. 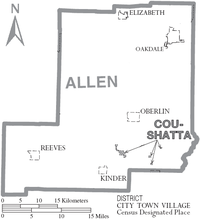