Agawam is a city [2] in Hampden County, Massachusetts, United States. The population was 28,438 at the 2010 census. Agawam sits on the western side of the Connecticut River, directly across from Springfield, Massachusetts. It is considered part of the Springfield Metropolitan Statistical Area, which is contiguous with the Knowledge Corridor area, the 2nd largest metropolitan area in New England. Agawam contains a subsection, Feeding Hills.

The Six Flags New England amusement park is located in Agawam, on the banks of the Connecticut River. Agawam's ZIP code of 01001 is the lowest number in the continental United States (not counting codes used for specific government buildings such as the IRS). [3]

The Native American village originally sited on the west bank of the Connecticut River was known as Agawam, or Agawanus, Aggawom, Agawom, Onkowam, Igwam, and Auguam. It is variously speculated to mean "unloading place" and "fishcuring place", perhaps in reference to fish at Agawam Falls being unloaded from canoes for curing on the flats at the mouth of the Westfield River. [4]

Ipswich, Massachusetts, was also known as Agawam during much of the 17th century, after the English name for the Agawam tribe of northeastern Massachusetts.

In 1771, John Porter moved to Agawam and founded a gin distillery nine years later. After he died, his grandson, Harry, continued to work the business as the H. Porter Distilling Company. The plant was sold in 1917, and during Prohibition, the main products produced in the building were potato chips and cider. After the Volstead Act was repealed, the mill began producing gin again but closed permanently in 1938. The building, on Main Street near River Road, served as Agawam's Department of Public Works garage until it fell into disrepair.

Agawam furnished 172 men who fought in the American Civil War, 22 of whom died in battle or of disease.

The original town hall, built in 1874 at the corner of Main and School Streets, housed the town government divisions as the current one does today, as well as the original town library located in the building's Tower Room. A small school building was located near the premises and held grades one through three. The building was demolished in 1938, and the property is now the site of Benjamin Phelps Elementary School. [4]

The Feeding Hills town hall, built in 1906, was almost identical to the Agawam town hall and was located at the corner of Springfield and South Westfield Streets. The building was demolished in 1950, and the Clifford M. Granger Elementary School opened in 1946 now occupies that land. [4]

May 29, 1930, and June 1, 1931, saw "grand openings" of Bowles Agawam Airport with the latter date including a visit from 100 biplanes of the United States Army Air Corps Eastern Air Arm. [5] A scheduled air service operated out of Bowles for approximately one year, before ending. The airport continued to operate as a civil airport until 1982. A pari-mutuel horse racing track, including grandstand and stables, was built adjacent to Bowles Airport. Seabiscuit won the Springfield Handicap at Agawam in track record time in October 1935. [6] The racetrack operated until pari-mutuel betting was outlawed by referendum in Hampden County in November 1938. [5] The airport also had plans in the early 1960s to become a commercial airport and host airlines for the city of Springfield, but plans were shelved. The airport and racetrack were demolished in the late 1980s and the area is now an industrial park. [4] [5]

View from Provin Mountain, the highest point in Agawam.

The highest point in Agawam is the 640-foot (195 m)-tall Provin Mountain, a ridge that, along with the southern part of East Mountain, forms the western boundary of the city. Both are traversed by the Metacomet-Monadnock Trail and are part of the Metacomet Ridge, a mountainous trap rock ridgeline that stretches from Long Island Sound to nearly the Vermont border.

Agawam has a subsection known as Feeding Hills that runs along the border of Southwick and Westfield, Massachusetts, and Suffield, Connecticut. Its border with Agawam was mainly determined by Line Street, and its ZIP code is 01030.

There were 11,260 households out of which 28.9% had children under the age of 18 living with them, 53.4% were married couples living together, 9.8% had a female householder with no husband present, and 33.7% were non-families. 28.0% of all households were made up of individuals and 11.3% had someone living alone who was 65 years of age or older. The average household size was 2.43 and the average family size was 3.01.

Agawam is one of thirteen Massachusetts municipalities that have applied for, and been granted, city forms of government but wish to retain "The town of" in their official names. [20] Agawam adopted a city form of government effective 1 January 1973 comprising a 15-member city council and a town manager. Since May 1989 a mayor is the elected leader of the city. The current city council consists of eleven members elected at large by the voters and is the legislative branch of the town government.

The current mayor of Agawam is William Sapelli. [21]

1810 – A cotton mill was erected on the site of present-day Six Flags New England.

1812 – Agawam Woolen Mill was established on Elm Street. After a fire, the building was rebuilt in brick in 1889 and still exists. The Agawam Woolen Company folded in 1949.

Six Flags New England, formerly Riverside Amusement Park, began as a picnic grove as early as 1840. It became a full-fledged amusement park in 1940. Riverside Park Speedway, a NASCAR racing track, was part of Riverside park from 1948 to 2000. Riverside was sold to Six Flags in 1996.

The Agawam Free Public Library was established in 1891. [23] [24] The first libraries were rooms in the Agawam and Feeding Hills town halls and the Mittenague School in North Agawam. After a 1904 fire destroyed the Mittenague School and all the books in it, Fred P. Halladay donated land and buildings in North Agawam to use as a library. In 1925, Minerva Porter Davis donated a building in Agawam Center to serve as the library in that section of town, replacing the Agawam Town Hall rooms. [25] The Feeding Hills branch moved to a building across the street from the Feeding Hills town hall when that structure was removed to make way for Granger school. In 1978 the libraries were consolidated in a new building adjacent to the High School on Cooper St. 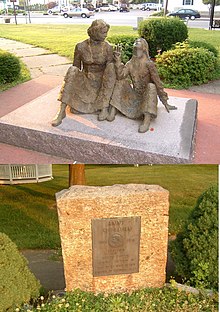