The 1952 Republican presidential primaries were the selection process by which voters of the Republican Party chose its nominee for President of the United States in the 1952 U.S. presidential election. Former U.S. Army General Dwight D. Eisenhower was selected as the nominee through a series of primary elections and caucuses culminating in the 1952 Republican National Convention held from July 7 to July 11, 1952, in Chicago, Illinois.

The fight for the 1952 Republican nomination was largely between Eisenhower, who became the candidate of the party's liberal eastern establishment, and Senator Robert A. Taft of Ohio, the longtime leader of the GOP's conservative wing. The moderate Eastern Republicans were led by New York Governor Thomas E. Dewey, the party's nominee in 1944 and 1948. The moderates tended to be interventionists who felt that America needed to fight the Cold War overseas and resist Soviet aggression in Europe and Asia; they were also willing to accept most aspects of the social welfare state created by the New Deal in the 1930s. The moderates were also concerned with ending the GOP's losing streak in presidential elections; they felt that the personally popular Eisenhower had the best chance of beating the Democrats. The conservative Republicans led by Senator Taft were based in the Midwest and parts of the South. The conservatives wanted to abolish many of the New Deal welfare programs; in foreign policy they were often non-interventionists, who believed that America should avoid alliances with foreign powers. Senator Taft had been a candidate for the GOP nomination in 1940 and 1948, but had been defeated both times by moderate Republicans from New York. Taft, who was 62 when the campaign began, freely admitted that 1952 was his last chance to win the nomination, and this led his supporters to work hard for him. Taft's weakness, which he was never able to overcome, was the fear of many party bosses that he was too conservative and controversial to win a presidential election.

Notable was the absence of Dewey. He strongly supported Eisenhower [1] and played an important role in persuading him to run and helping him win the nomination. Dewey used his powerful political machine to win "Ike" the support of delegates in New York and elsewhere.

Two other major candidates, but not so strong as Eisenhower or Taft, for nomination were Governor of California and Dewey's 1948 running-mate Earl Warren and former Governor of Minnesota Harold Stassen.

The following leaders were candidates for the 1952 Republican presidential nomination:

The following candidates did not place their name directly on the ballot for any state's presidential primary, but may have sought to influence to selection of un-elected delegates or sought the support of uncommitted delegates.

The following candidates ran only in their home state's primary or caucus for the purpose of controlling its delegate slate at the convention and did not appear to be considered national candidates by the media.

The following persons were listed in two or more major national polls or were the subject of media speculation surrounding their potential candidacy, but declined to actively seek the nomination.

Eisenhower scored a major victory in the New Hampshire primary when his supporters wrote his name onto the ballot, giving him an upset victory over Taft. However, from there until the Republican Convention the primaries were divided fairly evenly between the two men, and by the time the convention opened the race for the nomination was still too close to call. 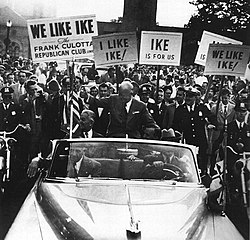 When the 1952 Republican National Convention opened in Chicago, most political experts rated Taft and Eisenhower as neck-and-neck in the delegate vote totals. Eisenhower's managers, led by Governor Dewey and Massachusetts Senator Henry Cabot Lodge, Jr., accused Taft of "stealing" delegate votes in Southern states such as Texas and Georgia. They claimed that Taft's leaders in these states had illegally refused to give delegate spots to Eisenhower supporters and put Taft delegates in their place. Lodge and Dewey proposed to evict the pro-Taft delegates in these states and replace them with pro-Eisenhower delegates; they called this proposal "Fair Play". Although Taft and his supporters angrily denied this charge, the convention voted to support Fair Play 658–548, and Taft lost many Southern delegates; this decided the nomination in Eisenhower's favor. However, the mood at the convention was one of the most bitter and emotional in American history; in one speech Senator Everett Dirksen of Illinois, a Taft supporter, pointed at Governor Dewey on the convention floor and accused him of leading the Republicans "down the road to defeat", and mixed boos and cheers rang out from the delegates. In the end Eisenhower took the nomination on the first ballot; to heal the wounds caused by the battle he went to Taft's hotel suite and met with him. The Convention then chose young Senator Richard Nixon of California as Eisenhower's running mate; it was felt that Nixon's credentials as a slashing campaigner and anti-Communist would be valuable. Most historians now believe that Eisenhower's nomination was primarily due to the feeling that he was a "sure winner" against the Democrats; most of the delegates were conservatives who would probably have supported Taft if they felt he could have won the general election. The balloting at the Republican Convention went: (Richard C. Bain and Judith H. Parris, Convention Decisions and Voting Records, pp. 280–286):

Freshman California Senator Richard Nixon was nominated for Vice President, also with notable Dewey's support. Republican politicians thought that his political experience, aggressive style (he was known as strongly anti-communist) and political base on the West would help political newcomer Eisenhower. [19]