The 1844 Democratic National Convention was a presidential nominating convention held in Baltimore, Maryland from May 27 through 30. The convention nominated former Governor James K. Polk of Tennessee for president and former Senator George M. Dallas of Pennsylvania for vice president.

Though his opposition to the annexation of Texas cost him support with expansionists and Southerners, former President Martin Van Buren entered the convention with the backing of a majority of the delegates. Before presidential balloting commenced, the convention voted to reinstate a rule requiring the presidential nominee to win two-thirds of the vote. On the first presidential ballot, Van Buren won a simple majority of the vote, but fell short of a two-thirds majority. As the balloting continued, Van Buren continually lost support to former Governor Lewis Cass of Michigan, former Vice President Richard Mentor Johnson of Kentucky, and Senator James Buchanan of Pennsylvania.

At the outset of the convention, the leading contender was former President Martin Van Buren of New York, who had been defeated in the 1840 election. [1] His principal opponent was Lewis Cass of Michigan, who had served as United States Secretary of War under President Andrew Jackson. [1] The annexation of Texas was a major issue. Van Buren publicly opposed immediate annexation because it might lead to a sectional crisis over the status of slavery in the West. [1] This position cost Van Buren the support of Southern and expansionist Democrats, but he believed that backing annexation would cost him the support of his fellow New Yorkers and other Northeasterners. [1]

Van Buren's supporters arrived at the convention with a majority of the delegates pledged to support him on the first ballot. [2] [3] Cass, meanwhile, had support from a handful of Southern states, but far fewer delegates pledged to him. [1] At the previous convention, in 1840, a majority of votes had been sufficient to secure the nomination, but this had been a departure from the traditional practice of requiring a two-thirds vote to win the nomination. [4]

Early in the proceedings, Senator Robert J. Walker of Mississippi, in cooperation with Senator James Buchanan of Pennsylvania (who would later become President himself), called for the reinstatement of the traditional 1832 and 1835 convention rule requiring the nominee to win two-thirds of the votes. Following a historical pattern in which a minority faction of Northern Democrats delivered votes to produce southern wing victories for pro-slavery legislation, the Van Burenite delegates split over the pivotal vote. Fully one-third of the pro-Van Buren delegates (52 of 154) voted to reinstate the two-thirds rule, along with 90 of 104 anti-Van Buren delegates, producing a final vote of 148 to 116. [5] The rule would remain in place until the 1936 Democratic National Convention, when it was revoked by supporters of Franklin D. Roosevelt. [4] 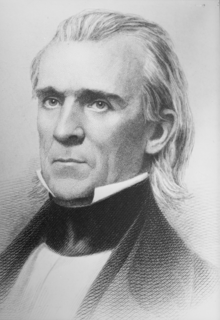 Van Buren supporters persisted in spite of the two-thirds rule setback, garnering 146 votes for their candidate on the first ballot, a 55% simple majority, but short of the now required 177 votes. Middle and Deep South pro-annexationists opposed Van Buren 75 to 3, depriving northern anti-annexationists the 31 votes needed for victory.

Support for Van Buren dwindled in subsequent ballots from 146 to 99, at which point Van Burenites were reduced to blocking nominations of numerous candidates, among them James Buchanan, Lewis Cass of Michigan, John C. Calhoun, and Levi Woodbury of New Hampshire. [6] [7] Incumbent President John Tyler, a former Democrat who was elected to the Vice Presidency on the 1840 Whig Party ticket, also hoped to win the support of delegates, but he was unable to find any backers. [8] Southern intransigence had succeeded in eliminating Van Buren and his stand on Texas annexation. [9] If the Democratic Party was to avoid dissolution at a national level, an acceptable nominee, fully committed to immediate annexation would be required, yet capable of unifying the party in the general election. [10] [11] Van Buren was open to deferring to Senator Silas Wright of New York, but Wright was a major supporter of Van Buren for president and had already declined to be considered. [8]

On the eighth ballot, the historian George Bancroft, a delegate from Massachusetts, proposed former Speaker of the House of Representatives James K. Polk as a compromise candidate. Polk, who had also served as Governor of Tennessee, had entered the convention in hopes of becoming the vice presidential nominee. [8] However, former President Andrew Jackson, who remained popular in the party, believed Polk was just the man to head the Democratic ticket. [8] Although a slaveholder himself, Polk never enunciated a slavery expansionist position with respect to Texas annexation, as had John C. Calhoun and the southern extremists. [12] Despite Polk's fervent advocacy for annexation, he had remained loyal to Van Buren throughout the Texas controversy, and anti-annexationist Van Burenites were willing to accept Polk, with reservations, having already recognized him as a suitable vice-presidential choice to have complimented a Van Buren ticket. [13] [14] Southern Democrats benefited from the Tyler-Calhoun machinations in eliminating Martin Van Buren as a presidential candidate, and clearing the way for the pro-annexation nationalist Polk. [15] On the ninth ballot, Van Buren instructed his delegates to support Polk, beginning a stampede to Polk that ended with him winning the nomination unanimously. [8] Consequently, Polk became the first dark horse, or little-known, presidential nominee. Van Buren complied with his party's decision to unite under a pro-annexation candidate, and worked to win New York state for Polk. [16] [17] [18]

Despite Whig efforts to cast Polk as an unknown – "Who is James K. Polk?" they asked rhetorically – he was respected as an effective political operator. [19] His sobriquet "The Young Hickory" contained a dual reference, one to his mentor Andrew "Old Hickory" Jackson, and one to the term Young America, a reference to an international movements struggling to establish republican forms of government and the overthrow of monarchies and ascribed to Manifest Destiny Democrats. [20] As a national imperialist, he exhibited an unwavering support for Manifest Destiny, perceived as a non-sectional devotion to expansionism, whether slave-soil Texas or free-soil Oregon Territory. [21] Polk argued that Texas and Oregon had always belonged to the United States by right. He called for "the immediate reannexation of Texas" and for the "reoccupation" of the disputed Oregon territory. Polk's political reputation was expected to diffuse northern Democratic resentment towards the Slavepower, while delivering Texas to the Deep South.

Polk and Richard Mentor Johnson had both campaigned for the vice presidency prior to the convention, but with Polk's nomination for president, the party looked to the northern states for a running mate. [8] The anti-annexationist Silas Wright, US Senator from New York, was nominated unanimously on the first ballot. When informed by telegraph at the US Capitol, Wright declined, partly out of a refusal to support a ticket backing the annexation of Texas, and partly because he didn't want to be accused of intriguing against Van Buren to benefit himself. After Wright refused to reconsider, John Fairfield attracted significant support during the second ballot, but on the third ballot the convention settled on George M. Dallas, a conservative from Pennsylvania. [22]

The basic events of the convention are outlined in the song "James K. Polk" by the rock band They Might Be Giants. [23]